The state of emergency, which lasted for about a month and a half on 5/25 (Monday), will be lifted nationwide, and if all goes well, the self-restraint of movement across prefectural borders is expected to be lifted nationwide on 6/19 (Friday). Therefore, the day is approaching when tourism will resume after taking hygiene measures as a new daily routine. And when booking travel products sold by travel agencies or accommodation plans sold by accommodation facilities using the direct sales reservation system for the purpose of stimulating domestic tourism demand, it is equivalent to up to half the price (up to 20,000 yen per night). The “Go To Travel Campaign,” to which the subsidy is applied, has also been announced to be repartitioned from open recruitment of contractors, but discussions are currently underway with the aim of starting in July.

Therefore, Travelzoo conducted an awareness survey on the “Go To Travel Campaign” from June 3 to 7 in order to disseminate accurate information inside and outside the industry as a media specialized in the tourism industry (valid responses: 3,013). 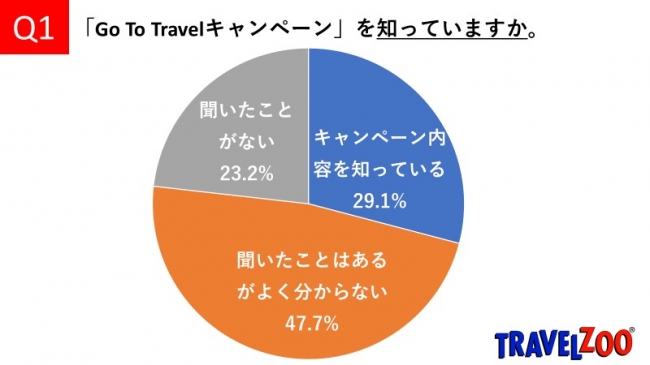 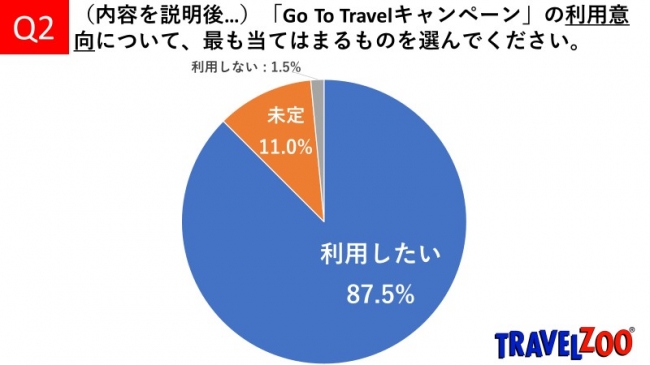 ■ 87.5% willingness to use after explanation

“Go To Travel Campaign” is equivalent to up to half price (per night) when booking travel products sold by travel agencies or accommodation plans sold by accommodation facilities using the direct sales reservation system for the purpose of stimulating domestic tourism demand. In the question (Q2) that asked about their intention to use the campaign, 87.5% answered that they would like to use it. On the other hand, there are a certain number of respondents who answered “Undecided (11.0%)” and “Not used (1.5%)”, which suggests anxiety about the new coronavirus.

78.6% are considering multiple domestic trips from 2.7 to December, and 71.3% plan to travel more than last year. 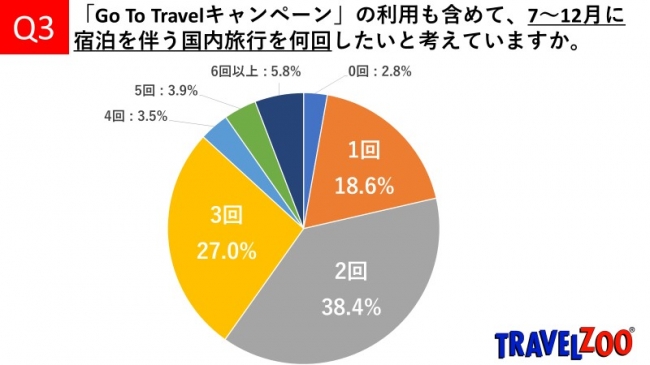 ■ 97.2% intend to travel domestically by the end of the year

When asked about the number of domestic trips with accommodation that they would like to carry out from July to December (Q3), 97.2% answered that they would like to travel domestically at least once, demonstrating their willingness to resume early travel. Among them, 78.6% of the respondents have the intention of traveling domestically multiple times within the year, centering on “2 times (38.4%)” and “3 times (27.0%)”, and “6 times or more”, that is, 1 month. 5.8% of the respondents wanted to travel domestically at a pace of more than once, indicating their intention to actively use the “Go To Travel Campaign”. 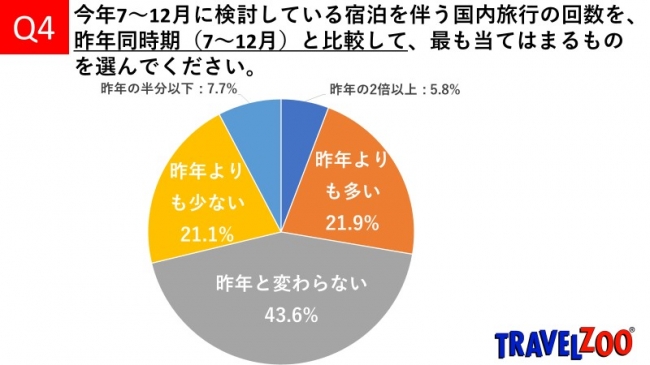 ■ Level equal to or higher than last year before Corona

3. The peak of “Go To Travel Campaign” usage is in October, and the planned number of nights is 45.1% per night, which is the highest. 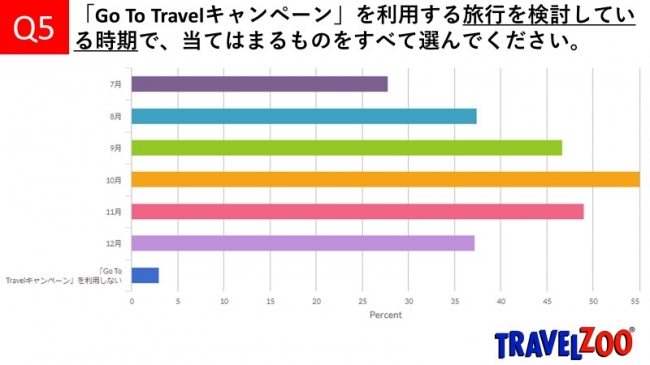 When asked about when to use the “Go To Travel Campaign” (Q5), it became clear that travel motivation tends to gradually increase toward October (55.0%). Hold down July (27.8%) and August (37.4%), where travel demand rises every year, September (46.7%), which has four consecutive holidays in autumn, and November (49.0%), which also has many holidays and overlaps with the autumn leaves season. The reason why October came to the top is thought to be the psychological balance between anxiety about the new corona virus and motivation to resume travel. 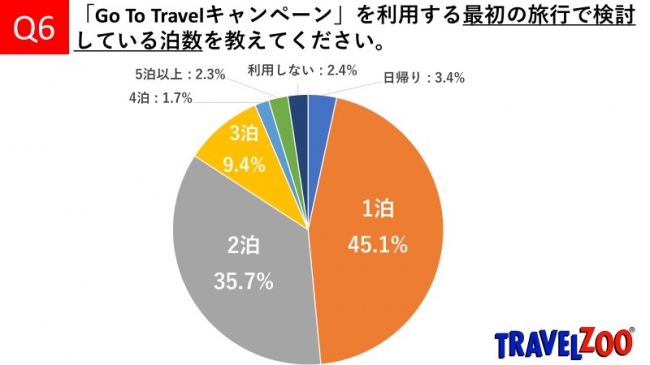 ■ The number of nights is mainly 1-2 nights

When asked about the number of nights considered for the first trip using the “Go To Travel Campaign” (Q6), “1 night” was the highest at 45.1%, followed by “2 nights” at 35.7%. rice field. Since the campaign applies subsidies worth up to 20,000 yen per night, the benefits increase as you stay longer, but the hurdles for actually taking long vacations are high, so the number of nights is relatively short. It is thought to be staying.

4. As for the travel selection criteria, “3 dense avoidance” is the most common 51.0%, and “I want to travel luxuriously because it is subsidized up to half price” is also high. ■ Travel selection criteria during the campaign

Finally, in the question (Q7) that asked the travel selection criteria in the “Go To Travel Campaign”, “I want to plan a trip while avoiding busy times and destinations” was the top with 51.0%, and “3 dense avoidance” continued. It turned out that the intention of was strong. On the other hand, the second most popular choice was “I want to go to the destination I had planned before the corona epidemic (38.5%)”, and by applying the campaign to the originally decided trip, it is more profitable. It can be seen that there are many respondents who want to realize their journey. In addition, 37.9% of the respondents who chose “I want to travel more luxuriously than usual because I am subsidized by up to half the price” ranked third, so it is suitable for luxury hotels and high-end guest rooms that have been difficult to reach until now. It has become clear that new demand is being created by the campaign, including the luxury of staying.

Start of "HIS FOOD PROJECT" Connect with people and create the future through "food" | H.I.S. Co., Ltd. press release