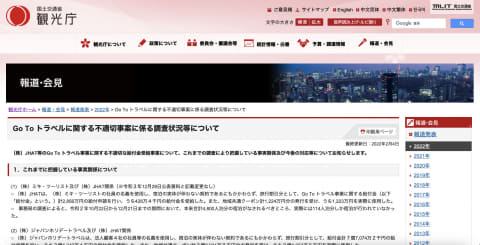 On February 4, the Japan Tourism Agency announced the status of investigations into inappropriate cases related to Go To Travel.

Facts that we have grasped so far

・ Japan Holiday Label uses the names of employees of four corporate customers, and even though it is a contract that does not involve the substance of accommodation, a total benefit of 770,742,000 yen is applied for as a travel discount. Of which, a benefit of 312,494,000 yen was received. In addition, a total of 330,318,000 yen worth of regional common coupons were issued, of which 319,636,000 yen was actually used.

・ According to a survey by the secretariat at this time, at least 9302 people’s nights (+127 people’s nights compared to the one announced on December 28) were not stayed, although they should have been used for 55,053 people. The facts have been revealed.

・ Even the four corporate customers who have signed contracts with Japan Holiday Label have confirmed only a part of the accommodation status, and will continue to investigate the accommodation entity in the future.

Miki Tourist and JHAT related (* No change in description from materials published on December 28, 2021)

・ JHAT uses the name of an employee of Miki Tourist and applies for a total of 28.56 million yen in benefits related to the Go To travel business as a travel discount, even though the contract does not involve the substance of accommodation. Of which, I received a benefit of 4,284,000 yen. In addition, a total of 12.24 million yen worth of regional common coupons was issued, of which 12.23 million yen was actually used.

・ According to a survey by the secretariat, during the period from October 22nd to December 21st, 2020, a total of 4800 nights should be stayed, but in reality only 114 people are staying. There wasn’t.

(1) After further scrutinizing the facts, we will request the relevant corporations to return the benefits already paid and the inappropriate use of the regional common coupons.

(2) JHAT, Japan Holiday Label and Miki Tourist will stop participating in the new Go To Travel business that is scheduled to start in the future.

(3) We will continue to carry out necessary investigations in full cooperation with investigative agencies, with a view to criminal accusations.

(4) H.I.S., the parent company of Miki Tourist and Japan Holiday Label, reported on the results of the governance improvement measures on January 18 and the results of the continuous investigation on January 28. In the future, we will keep an eye on whether the governance improvement measures prepared by the company are being properly implemented, and continue to request cooperation in the investigation by the Go To Travel Secretariat to clarify the entire facts of this case.

(5) The travel and accommodation industry groups have just reported and announced on January 25 the measures to prevent recurrence and their implementation schedules, and will continue to pay close attention to their thoroughness.

(6) In the investigations conducted by the Go To Travel Secretariat and H.I.S. so far, TABIKOBO, Travel Standard Japan, etc. were also involved in the same inappropriate benefit receipt cases as HIS subsidiaries. Since it became clear that there was a suspicion, we will proceed with an investigation to clarify the overall picture of the facts of these cases.

(7) As a measure to prevent recurrence, at the start of a new Go To Travel, we will take measures in the attached sheet (stricter examination, announcement of businesses that have suspended participation, strengthening of the external reporting system, etc.).

Selected for NYLON JAPAN solo cover! The love-filled Snow Man leader "Iwamoto Hikaru" guys has "Ryogo Matsumaru" on the cover for the first time in his life with his beloved cat Lido! --NYLON JAPAN