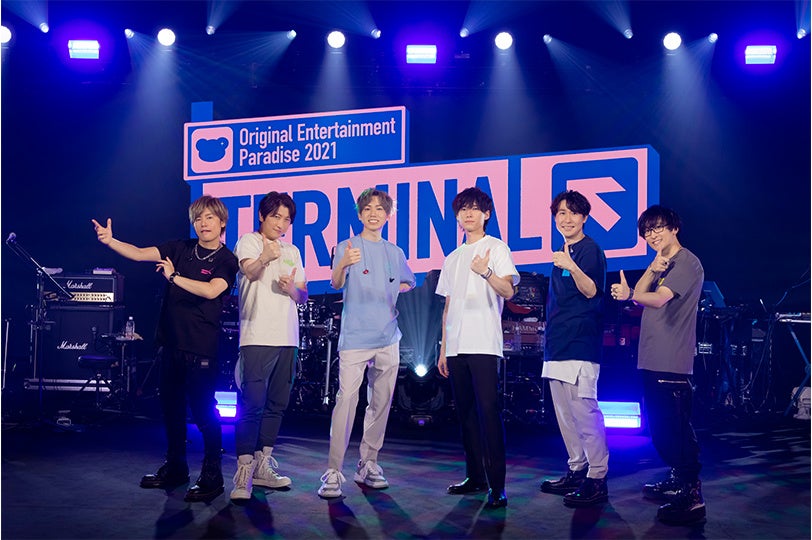 The music festival “Original Entertainment Paradise -Orepara- 2021 TERMINAL” by gorgeous male voice actors held in December last year will be broadcast for the first time on TV with all songs uncut! On the TBS channel, we will deliver the pattern of DAY 1 with Gakuto Kajiwara & Toshiki Masuda as guests, along with the behind-the-scenes making video that will be a must-see for fans.

Hosted by four immovable and popular voice actors, Daisuke Ono, Kenichi Suzumura, Shotaro Morikubo, and Takuma Terashima, “Feast” and “Original Entertainment Paradise” are abbreviated as “Orepara”. In the 14th year since the start, this performance, whose theme was “TERMINAL (airport)”, was held in the form of online distribution without spectators, changing the location from the usual venue, Ryogoku Kokugikan.

DAY1 to be delivered this time has Gakuto Kajiwara and Toshiki Masuda as guests, and starting with the opening number “United Flag” by four hosts and guests, each one is completely different in my para-traditional “Battle of the Bands” style. He showed off his performance and singing voice that made the most of his individuality.

In addition, the behind-the-scenes making video that was not delivered online will be released for the first time!
Don’t miss the must-see videos for fans, such as the enthusiasm of the members before the delivery, the appearance of the guests who are nervous before the performance, and the retrospective talk immediately after the delivery!

This program can also be viewed on PCs, tablets, and smartphones on “SKY PerfecTV! Program Distribution”.
* There is a missed delivery
Please check the program homepage for details such as viewing conditions.

■ Present information
To commemorate the broadcast, we will present an official pamphlet for 5 people by lottery!
Please check the application keywords announced in the program and apply from the URL below.