(Highlights of travel trends in Japan)

・ As an activity that can support the area of ​​the travel destination, eating local ingredients and eating and shopping at local small and medium-sized shops are the most supported in Japan with 70% or more.

(Travel trend highlights in 7 countries around the world)

・ Of all the seven countries surveyed, Japan is the number one Asian country that we would like to visit on a trip in 2022.A bright outlook for inbound demand after the resumption of full-scale overseas travel

American Express International, Inc. (Headquarters: Minato-ku, Tokyo, President: Hiroyuki Yoshimoto, hereafter American Express) traveled from February 3 to 11, 2022 in seven countries including Japan. We have released the “American Express Travel Global Travel Trend Report” *. The survey found that many Japanese respondents generally liked his trip to 2022. When asked “What do you think about traveling in 2022?”, Most people answered “hopeful (35%)”, and another question. Many Japanese respondents traveled in some way during Golden Week, the most recent long holiday, with 50% of respondents saying they are considering traveling during Golden Week 2022. The result shows that we are planning for.

● -As for travel-related spending in 2022, 69% of respondents in Japan said they would spend about the same amount or more on travel in 2022 compared to the year before the Korona-ka. increase. Among them, the intention to spend on accommodation is the highest in Japan, and there is a tendency to enjoy a high-quality hotel experience at accommodation in addition to activities such as sightseeing at the destination. In terms of the frequency and duration of trips scheduled for 2022, the average of seven countries around the world is “multiple short-term trips (28%)” and “2-3 long-term trips (24%)”. On the other hand, many people in Japan plan to travel for a short period of time, such as “multiple short-term trips (46%)” and “2-3 long-term trips (17%)”. Because of the short term, we are seeing the desire to enrich and enrich the travel experience, including each stay.

o In addition, only Japan has “travel insurance” in the top three spending items, and there is a tendency to emphasize the response when the schedule is forced to be changed due to an unforeseen situation. It has been.

●-When visiting on a trip, as activities that lead to support for the area, “Eating ingredients produced in the area during the trip is the most contributing to the area and feels significant (73%)”, “During the trip” I feel that shopping and eating at small and medium-sized shops in the area will contribute to the area (71%). “In Japan, there is a strong tendency to feel the significance of contributing to the local community by eating local ingredients and shopping and eating at small and medium-sized shops rooted in the area.Cultural experience was the most popular result at 34% as a tourism activity at a destination where you can feel the significance.

●-When asked about the continents / areas of the world that they would like to visit on a trip in 2022, Japan ranked in the top three in Asia (41%), Europe (34%), and Australia / Oceania (20%). The destinations I would like to visit in Asian countries are Japan (40%), Singapore (23%), and South Korea (20%), indicating that domestic travel is more important than overseas travel. increase.

●-On average from seven countries around the world, Japan (40%) and Singapore / Thailand (23% at the same rate) are the top three Asian countries that we would like to visit on a trip in 2022. In response to the question, “Which country would you like to go to if you could go to an Asian country that you would like to visit once in a lifetime?” 18%), Singapore / Thailand (10% at the same rate), when overseas travel resumes in earnestThe results show that Japan continues to have strong inbound demand. 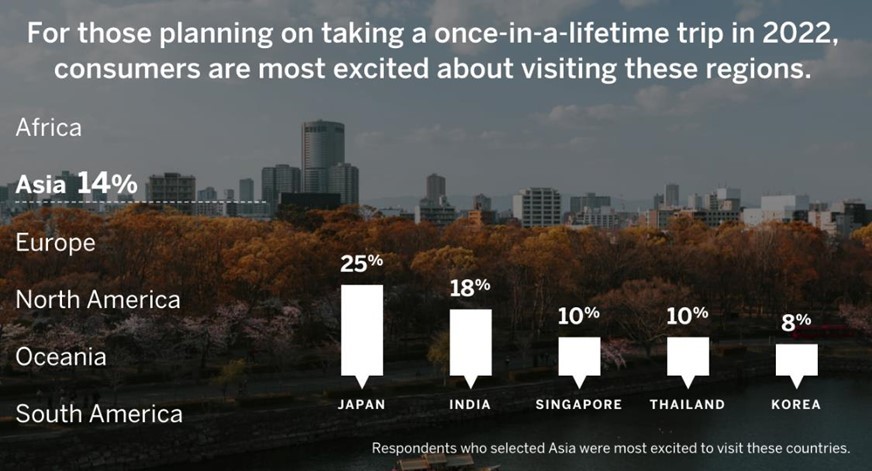 In Japan, a survey was conducted on people who traveled by plane at least once during FY2019 with a household income of US $ 70,000 or more.

A global service company founded in New York, USA in 1850. We provide products and services that support a variety of lifestyles for individual customers, and provide cost management and data analysis tools that can improve management efficiency for corporate customers, and are large-scale / medium-sized. We support the growth of a wide range of businesses, including corporations, small and medium-sized enterprises, and sole proprietors. In Japan, we opened a branch office in Yokohama in 1917 (Taisho 6) and started business, and now we have the highest quality service through our own network of affiliated stores and travel service bases that spread to more than 180 countries and regions around the world. Is provided. In addition to the traditional hotels, restaurants and retail stores, the number of stores that can be used in daily life, such as utility bills, supermarkets, and drug stores, is expanding through the alliance with JCB for American Express cards.