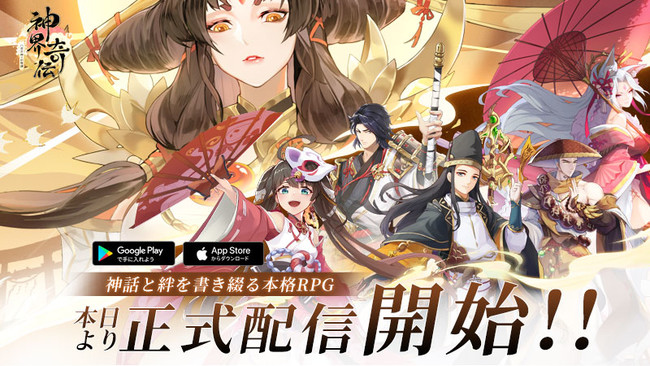 Sky Entertainment Network Limited has started the official service of the new app “Kamikai Kiden ~ Yamillion God’s Illusion Tan ~” (hereinafter, “Kamikai Kiden”) from May 11th. It also revealed that it has already won first place in the free app ranking of the App Store & Google Play.

■ Full-scale RPG “Kamikai Kiden-The Illusion Tan of Eight Million Gods-” that spells out myths and bonds will officially start service from May 11th!

“Kamikai Kiden-The Illusion of Eight Million Gods-” (iOS / Android) has officially started service from 10 o’clock today.Also, on May 11th (Wednesday), the App Store won the first place in the free app ranking as early as before the official service started.

And, in order to match the rhythm of life in modern society, both manual mode and auto mode are installed in the game, and you can switch as much as you want at any time, and you can realize efficient game play at your own pace.

In addition to that, the game is fully equipped with casual elements that allow you to fully enjoy your daily life as a god, so you can enjoy not only battle but also a leisurely life.Let’s experience a profound story and a novel casual play in “Mythical Biography”! 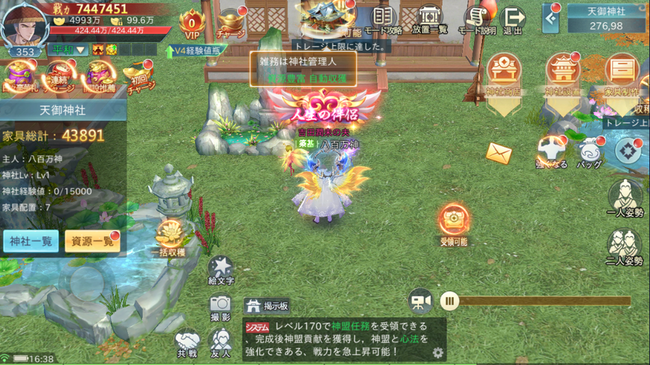 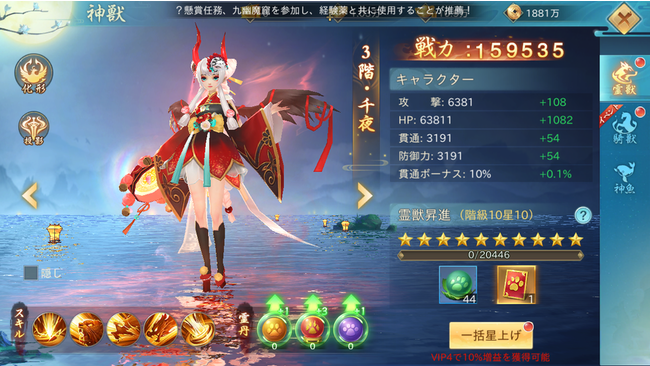 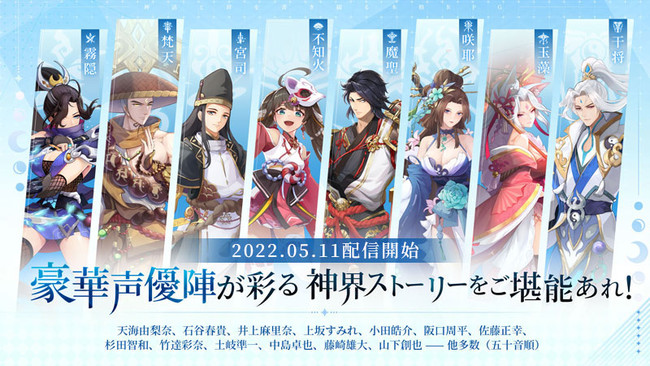 Brahma role Tomokazu Sugita
Ayana Taketatsu as Shiranui
Shuhei Sakaguchi, the role of the devil
Yurina Amami as Sakuya
Sumire Uesaka as Tamamo
Mr. Junichi Toki, the role of the general
Haruki Ishiya as the priest
Marina Inoue as Kirigakure

■ Japan’s number one cosplayer Enako is appointed as a promotional ambassador! 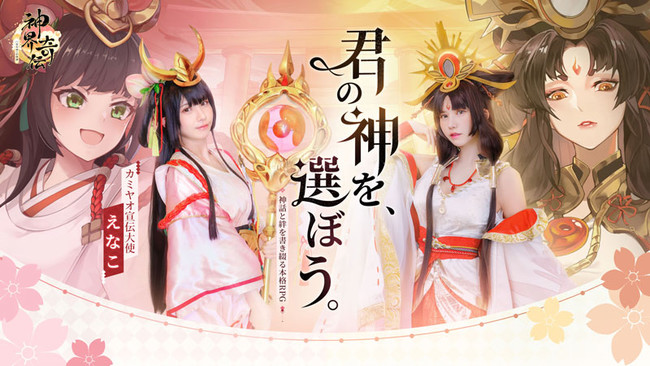 Enako, Japan’s number one cosplayer who has set foot in the mythical world, has been appointed as Kamiyao’s advertising ambassador. We also cosplayed “Omikami” and released a Web CM and an interview in which Enako appeared. In the game, an original “Kamiyado” system that allows anyone to choose their own god, transform, and fight is implemented, and in order to appeal its features to players, this time the best cosplayer in Japan. We have decided to appoint Mr. Enako.

The “Kamijuku” system is a system that allows you to instantly increase your fighting power and wipe out enemies by incorporating the power of the gods who have left their names in Japanese mythology, such as Susanoo, Okami Mikoto, and Yomizu Okami. .. In addition, it is fully equipped with a training system that allows you to grow the abilities of the gods, and you can fully project your favorite gods and deepen your ties with them. Please come and experience the unique “Kamiyado” function when the official service starts!

▲ Interview with Mr. Nako, who can use Kamiyao’s promotion

From, on official Twitter, we held an official release commemorative campaign in line with the “gift for a total of 1 million yen”. There are plenty of luxury prizes such as Amazon Gift Certificates, iPhone 13 Pro Max and Nintendo Switch. Please follow the official Twitter account and participate in the campaign. 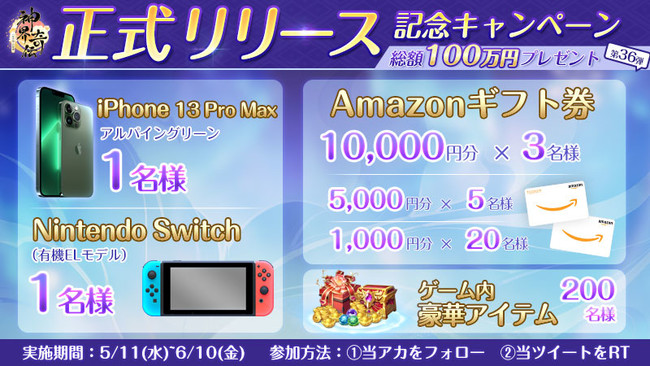 Currently, “Kamikai Kiden” is holding a number of campaigns to commemorate the official service start from May 11th (Wednesday).Here are some of the events.

For other events and details of the event, please see the announcement page on the official website.

■ Get limited skins at “Server Carnival”

A “Server Carnival” event is being held to celebrate the number of pre-registered users exceeding 300,000. Just log in to get the limited skin “Inari Kitsuneya” and gorgeous in-game items. 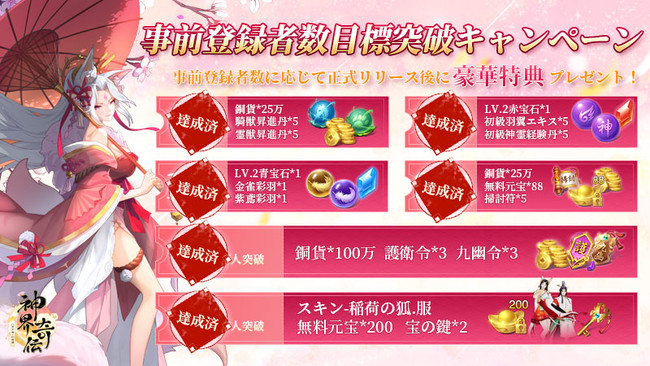 Players with online time of 60 minutes or more and level 30 or above can participate. Chance to get items such as the rare spirit beast “Seiro Rensen” with 100 consecutive gachas! 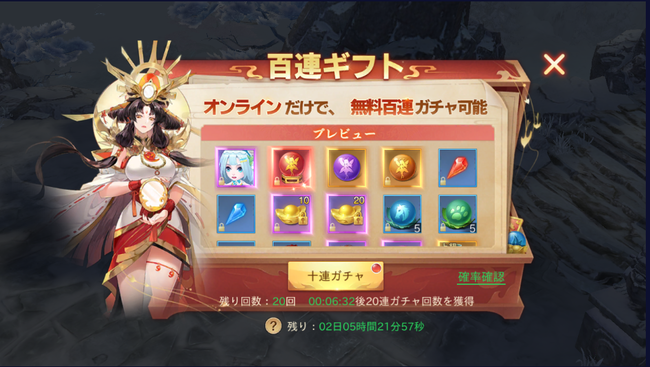 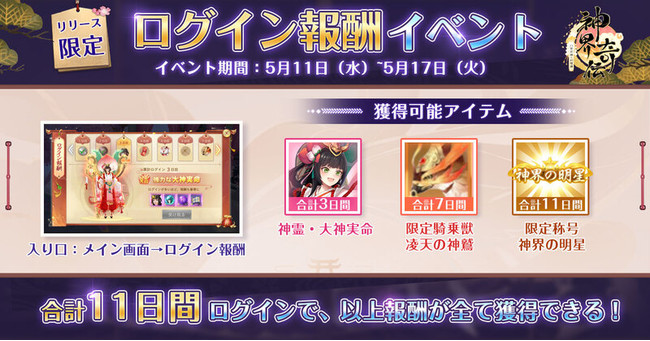 Log in for a total of 30 days to get 600 free original treasures and the amulet appearance “Qiulong Meiju”! 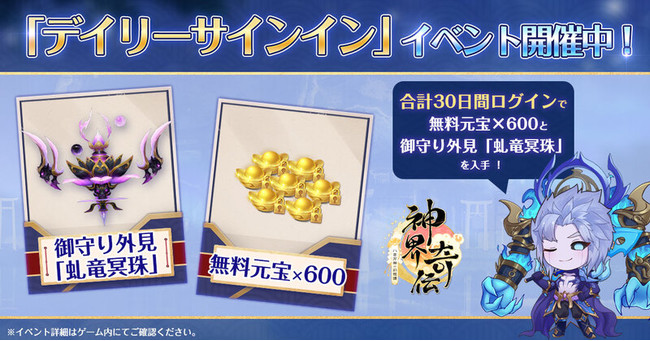