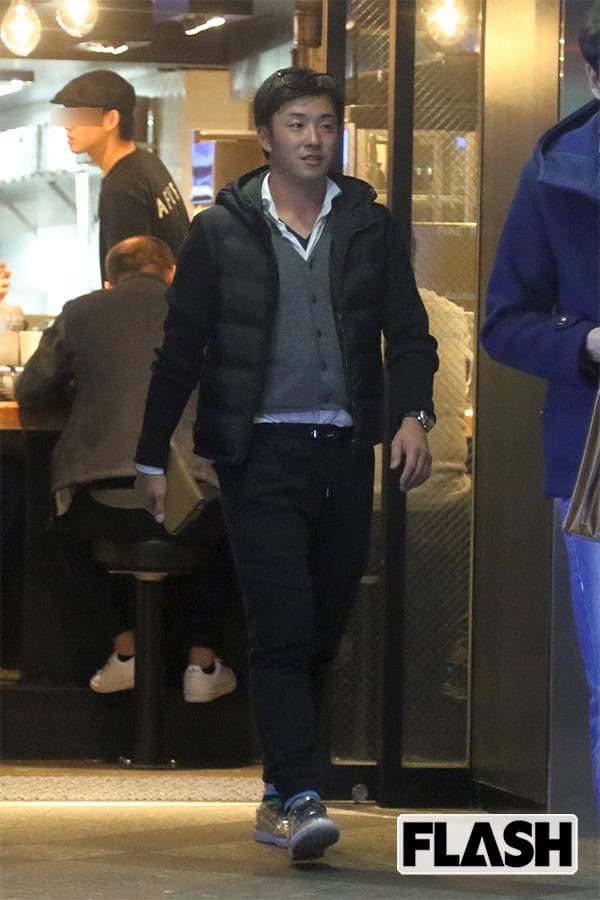 In 2015, a joint party with Natsumi Uga (at that time) of TV Asahi caught by this magazine. She was originally close to the station, but …

It has been more than a month since the 2022 professional baseball game began.

Players who retired only last season have begun to start their next life, including former Nippon-Ham Fighters Yuki Saito (33).

At Koshien in the summer of 2006, he became the winning pitcher as the ace of Waseda Jitsugyo, the representative of West Tokyo. He joined Nippon-Ham Fighters in 2011 while he was a smooth baseball player, having been the best in Japan even after entering Waseda University.

[Related article: Yuki Saito Daisuke Matsuzaka hasn’t been there yet … The team decided to hold the “retirement match” at the fastest “natural reason”]

Since then, he has been a professional baseball player for 11 years.

In professional baseball, the total was 15 wins and 26 losses, which may not have been as expected. However, due to his outstanding reputation, Mr. Saito has received a great deal of attention from the beginning of his retirement announcement to the end of his second career.

“Not only baseball commentators, but also talents and politicians were talked about. However, it was the sports casters who were regarded as the” favorite “.

It is said that most TV stations have moved to acquire it, but the one that was particularly active was said to be TV Asahi.

The station has a signboard program called “Netto Koshien” produced by affiliated stations, which was perfect for Mr. Saito, the winning pitcher of Koshien. And there is also a sports caster frame at “Hodo Station” “(Entertainment Reporter)

However, on April 3, it was announced that Atsuya Furuta (56) will continue to appear in “Netto Koshien” in 2022.

After Mr. Saito’s retirement, most of his exposure is through commercial appearances and visits to baseball and softball venues around the world.

“In fact, there were rumors that Mr. Furuta was a strong candidate for the next coach of the Japan National Baseball Team” SAMURAI JAPAN “.

At that time, it seems that he was moving, “I want Mr. Saito to appear after Mr. Furuta takes office.” However, Hideki Kuriyama was appointed as the director of SAMURAI JAPAN.

In addition, Mr. Furuta has a good reputation for commentary on play with knowledge, and the commentators appearing in “Hodo Station” have a good reputation, so it seems that Mr. Saito has disappeared. “

On the other hand, the sports newspaper desk said, “Mr. Saito himself had a disappointment with the casters and commentators.”

“Although it is well known, Mr. Saito recognizes that he has not made any professional achievements.

You probably knew well that this would raise criticism. It seems that the people around me said, “I’m not convincing to explain.”

At the Nippon-Ham Fighters in February, there was an event that strengthened his determination.

“I went to visit the old nest camp in Nago City, and at that time, Mr. Saito” pitched “with a free hit.

I think there was one aspect of creating a topic. Furthermore, because Nippon-Ham was an event in the midst of “Shinjo Fever,” it was thought that it would be dealt with extensively in sports newspapers and sports news the next day. However, in reality, it was not so much talked about.

He is a person who originally had “study” and thought about playing baseball. He felt a sense of distance in the field and thought, “This is not the place where I can play an active role.” (Same as above)

Contrary to these hardships, “Yuki Saito Co., Ltd.” launched in December 2021 is on track.

There are many requests for projects from companies, and it seems that we will continue to be involved in various activities in the future. At the same time, Mr. Saito himself revealed that there were more than 500 “request for joining the company” emails.

Mr. Saito has always said, “My dream for the future, my goal is to create a baseball field. It’s not just baseball like in the United States, it’s like a ball park where children can participate in various events.” ..

It seems that the work behind the scenes will be the main battlefield, away from the front stage for a while.

Many people came from the first day! "Japan Sports Week 2022" Proposing solutions based on the concept of "overcrowded" with stadium lockers and strategy boards | Pia Corporation press release