Qookka Entertainment will use the IP of Koei Tecmo Games’ historical simulation game “Sangokushi 13” and develop a smartphone game application “Sangokushi Shinsen” under the supervision of the company on May 19, 2022 (Thursday). To commemorate the first anniversary of the game, we released an interview with the game management team.

In this interview, let’s check what Mr. Ataru, the official representative of the “Sangokushi Shinsen” management team, said. 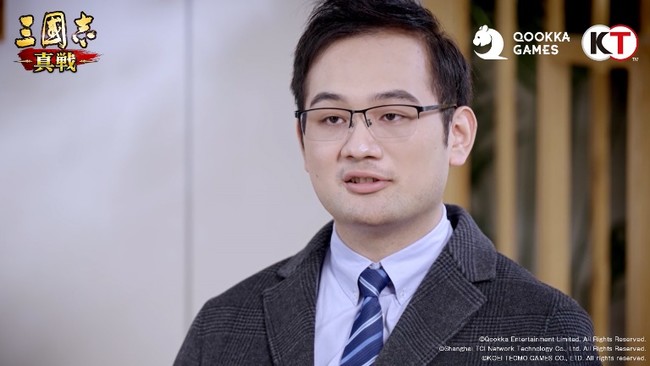 Q: Congratulations on the 1st anniversary of delivery. First of all, please tell us your frank feelings.

A: It’s often said that it’s like a light-headed arrow. I think it’s been a year in a blink of an eye.

How should I express it? Thinking, looking down, continuing to walk, and raising my face, I feel like I was walking a lot.

To tell the truth, I also play secretly. Although he is a member of an alliance that is not available now, he is working hard as a pier-securing swordsman.

Q: After the distribution, there was a big response from SLG users. Could this flow be expected?

A: We really thank all our users! But what made me even more happy was that despite this core game, many people were crazy about it.

Regarding the flow, to be honest, it was more than I expected. “Sangokushi Shinsen” is a game in which the team play element is extremely strong and strategicity is very important. It’s not a game where you can enjoy the exhilaration of the world, but you can enjoy the moment of “My strategy is here!” By making full use of strategies and organization.

It was my initial idea that this is a game that chooses the player because it is a game with such specifications, so it is so popular! ?? To be honest, I was very pleased with the surprise.

Q: What was the most memorable user reaction?

A: Even our management has come up with an unexpected strategy. As I mentioned earlier, this game is a game that emphasizes strategy, but on the flip side, it also means that there are various elements of interaction and fun to play.

Only certain actions can be taken on the system. However, users can use quirks to win, incandescent battles, lure opponents to the spot, and form alliances with other alliances behind the scenes, depending on the situation. It is full of attractions. I am very impressed with that point. 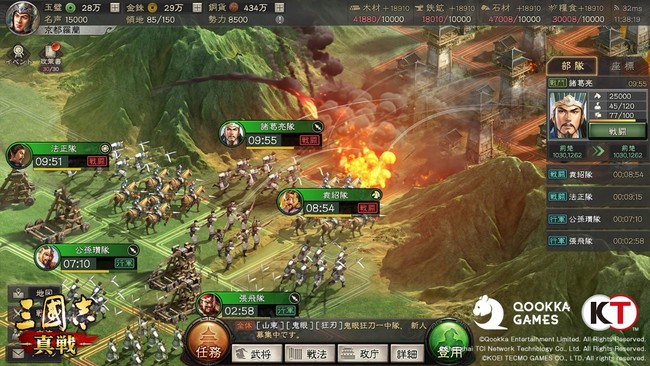 Q: It seems that various new functions such as vertical screen mode have been implemented. What are you aiming for?

A: Actually, it was because many people said that it was inconvenient to play with both hands. Thank you for your valuable feedback! We would like to take this opportunity to thank you again. As a creator, I felt the utmost strength and joy.

By the way, when we first saw the above opinions, we all decided that “vertical screen mode is indispensable for trains, meals, etc.!” And immediately started development.

In addition, we have developed and adjusted the PC version, troop dispatch restrictions, night battle mode, etc., all based on your opinions. Speaking of night battle mode, we made adjustments such as having a torch in the unit so that when we dispatched at night, we would exhaust our physical strength and create a more atmosphere. 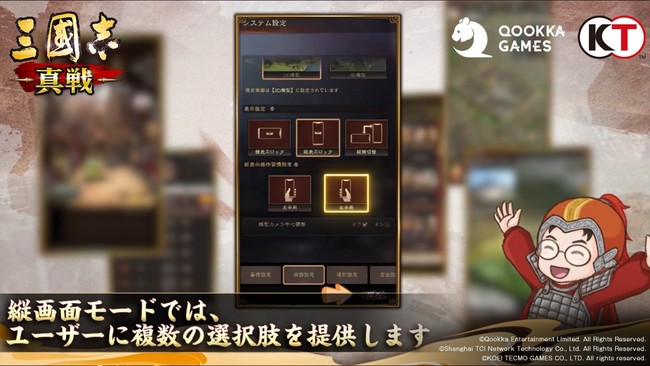 Q: Next, I would like to ask about measures such as the 1st anniversary event. First of all, what kind of concept was this event planned for?

A: We would like to express our gratitude to those who enjoy this title with the feeling that “every day in the true battle is dense” and provide a place where users can leave their own memories. I wanted to provide it, so I thought about this project.

Q: Please tell us the highlights of the event and the points you would like us to pay attention to.

A: The 1st anniversary will be a break. As for live broadcasting, there is no problem with archiving, so please watch it.

The contents will be the orchestra performance, the latest information on the new PK season “Battle of Red Cliffs”, and the award ceremony.As part of the concept of this game, one season is a history and a memory.Therefore, the slogan of the 1st anniversary is “Kizuna is the best wisdom.”

History is what is written. I wanted to keep the trajectory left by the users, even if it is fragmentary, so I made a player movie and a commemorative short movie.

Even if you are new to “Sangokushi Shinsen”, we would appreciate it if you could watch it.

Next, what kind of information does Ataru plan to talk about the future of “Sangokushi Shinsen”? 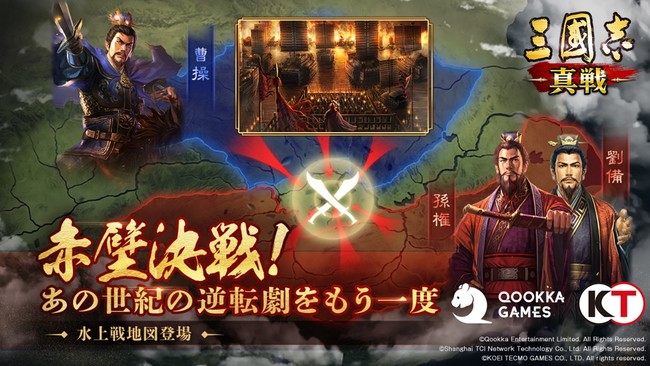 Q: I heard that the “PK Season Battle of Red Cliffs” is about to begin. I think that some users have already been informed of the new content, but is it okay to let everyone know the fun of the new season from the perspective of the game developer?

A: Zubari, the true value of Sangokushi is the Red Cliff. I think we can deliver a groaning game experience packed with elements unique to the Red Cliffs.

In this new PK season “Battle of Red Cliffs”, you can experience the naval battle using ships by updating the waterways, so to speak, rivers. In addition, we have added a fire meter system because “Red Cliffs is a fire attack”.

If you judge the direction of the wind, seize the opportunity, and perform a fire meter, you can realize a fire-burning continuous operation. That is the flame of Suzuhara. In addition, we will implement a new military commander. The Red Cliffs are Komei and Zhou Yu when they were young. Appears as an SP military commander. Do not miss. 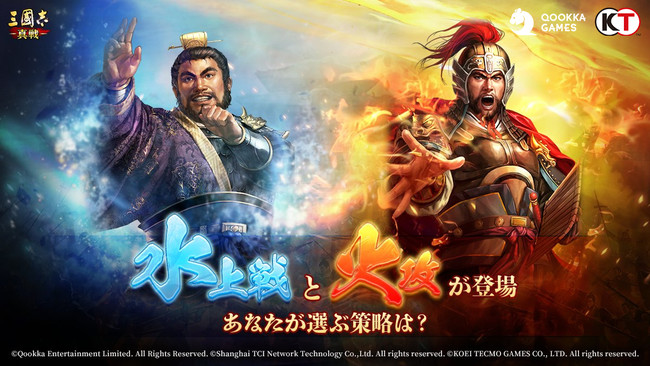 Q: Then, could you tell us about the outlook for the entire project in the future?

A: I can’t tell you the specifics yet, but I’m almost ready for the next new season. The only keyword I can tell you is “special terrain”. Special terrain is a new important factor that influences the battlefield. In other words, it’s a power-up version of the terrain element.

Of course, we will continue to make efforts in the coming season, keeping in mind that we will always be able to experience the freshness and the original enjoyment of the game without making it a rut.

Q: True battle is a season-based game, and I think that the scenario is different and the final goal is different for each season. Whenever possible, please tell us what scenarios your users will be able to experience in the future.

A: We will deliver a scenario where you can experience all the famous campaigns as if you were a party on the battlefield.

Next, the question is how to express the characteristics of the campaign. In that respect, the Red Cliff is relatively easy. Because it is a ship and a fire.

I think the PK season “Battle of Red Cliffs” was completed with a very satisfying setting, so please look forward to it.

As a supplement in terms of scenario experience, if you become a new player, you will definitely start from Renewal Season 1 “Yellow Turban Rebellion”. The reason is that Sangokushi is generally recognized as starting with the Yellow Turban Rebellion. We have designed the season so that you can enter from the yellow turban that easily blends into the world view and become more familiar with the world view of the Three Kingdoms.

In the game, two states have been closed from the six birth states that were initially released, where the Yellow Turban Rebellion occupies the main castle. Users should lead the army and compete with other alliances to occupy the castle, secure the advantage of the land, drop the final goal “Luoyang” and claim the victory to the world. Must be.

And don’t worry! We promise to provide users with content that will surely satisfy them, and to make the game interesting and long-lasting.

Q: I think some readers are thinking about starting “Sangokushi Shinsen” after seeing this article. Can you give us some advice for such people?

A: The real pleasure of this game is to join the alliance and play together. We hope you enjoy the process of skipping gag with your peers, sometimes discussing strategies, formulating and executing strategies, and whether the destination is defeat or victory.

The scenarios will be reset and new every season, so you can enjoy yourself with all your might and try new beginnings.

Q: Finally, do you have a message for true war fans?

A: Finally, I would like to thank everyone who has played again.

When I witnessed a strategy that everyone had come up with that I couldn’t even think of in terms of management, I was very impressed and thought that it was all about the creator. I’m really thankful to you.I will continue to study how to play every day, so I would appreciate it if you could give me your opinion … No, please do!

Finally, I would like to send you some special information to the monarchs. In commemoration of the 1st anniversary of the service start of this work “Sangokushi Shinsen”, we are developing various commemorative events and projects inside and outside the game. If you are a monarch, please join us and get rewards to liven up the 1st anniversary together!