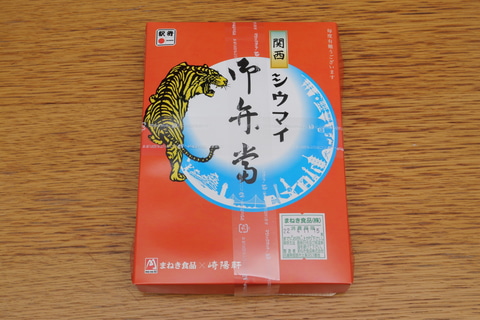 In order to revitalize the economy of the ekiben industry that was hit by the Korona-ka, Maneki Shokuhin asked Kiyoken to “collaborate with Shiumai Bento”, and Kiyoken agreed with that feeling and said “Kansai Shiumai Bento”. Was born.

Most of the bento boxes are faithfully inherited from the basics of the original Shiumai bento box. For example, the container is the same as the original box, and the rice is a bale rice topped with black sesame and koume. In addition, 5 shumai are arranged firmly, and abundant side dishes are lined up next to them.

However, some of the shumai and side dishes have been seasoned in a Kansai style to achieve a taste different from that of the original family. The design of the hanging paper follows the original family, but the silhouettes of famous places such as tigers and Himeji Castle are drawn, which conveys the Kansai style.

The hanging paper follows the design of the head family, while silhouettes of tigers and famous places in Kansai are drawn.

The same size box as the head family is used, and the balance between side dishes and rice is almost the same.

The main character, Shiumai, has the same scent as the head family, but the difference from the head family is that the umami of kelp soup stock, dried bonito flakes, and chopped lotus root are added. When I actually eat it, I feel that it has a lighter and gentler taste than the original shumai. The crispy texture of chopped lotus root is also fun, and it has a different taste from the original one.

Other side dishes are also seasoned like Kansai. The fried chicken is seasoned with “Higashimaru” foam soy sauce and chin soup stock, and has a lighter taste than the original. Tamagoyaki is a soup stock roll egg with a strong flavor of soup stock, and its sweetness is suppressed. In addition, the bamboo shoots cut into chopped wood are boiled in the soup stock used in “Maneki no Eki Soba”, giving the Kansai people a nostalgic and relaxing taste. The bamboo shoots of the head family are diced and seasoned with a fairly strong flavor, so they can be enjoyed as a side dish for sake, but the impression is that this is purely a perfect companion to rice or a chopstick rest.

In addition, there are side dishes with a slightly different lineup from the original family, such as grilled Spanish mackerel, sweet and sour sauce, and shibazuke. And, in the center of the side dish, black flower bean simmered is served instead of the familiar “apricot” at the head family. The sweetly cooked black flower soybeans with a chewy texture can be enjoyed as a dessert.

The leading role, Kansai Shumai, is firmly arranged in 5 pieces.

With the addition of kelp soup stock, dried bonito flakes, and chopped lotus root, the taste is gentler than the original.

Deep-fried chin soup stock has a light taste.The omelet on the side is a soup stock roll with less sweetness.

Boiled bamboo shoots are boiled in the soup stock of “Maneki no Eki Soba” for a relaxing taste.

Unlike the apricots of the head family, sweetly cooked black flower bean simmered is served.