Titans Entertainment (Hong Kong) announced that it will start distributing the smartphone puzzle game “Cat Island Diary”, which is licensed from Sputnik and is distributed and operated in Japan, globally from May 26, 2022.

The English name is “Cat Island Diary” and the traditional Chinese name is “Aoshima Diary”. In addition, we will carry out a Twitter campaign to commemorate the global distribution.

[Twitter campaign]
To commemorate the global distribution, a Twitter campaign was held in Japan. During the period, 10 people will be given an Amazon gift certificate by lottery from those who follow & retweet (RT) on the official Twitter of Cat Island Diary. 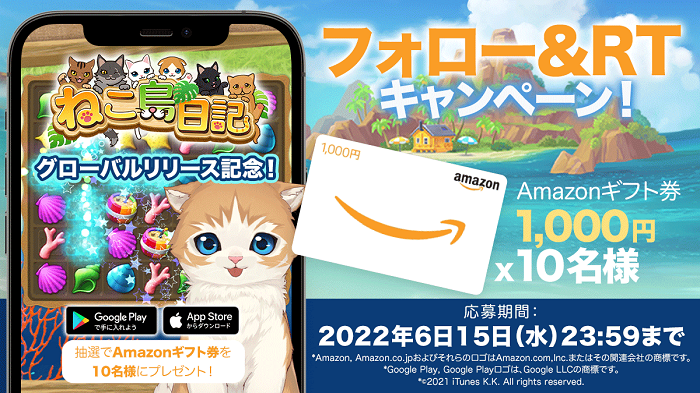 [About game functions]
With the global distribution, we have expanded the game functions. We have implemented unique skills for each cat that takes you to the puzzle.

As your skill grows according to your level of bond with the cat, it will help you erase the blocks. In addition, we are changing the number of times items are used during puzzle play and renovating some game screens.

Please take this opportunity to play the new “Cat Island Diary”. In-game, we are running a campaign to commemorate the global distribution.

・ Campaign 1: In-game items will be presented to everyone!
For those who log in during the campaign period, we will give you 6,000 in-game coins and 2 in-game items “Color Bomb” x2 “Cross Bomb” x2 “Gauge MAX” x2.

■ What is Cat Island Diary?
It is a puzzle game where youths with memory loss live on an uninhabited island where only cats are present, and unravel their own memories and the mysteries of the island. The puzzle adopts a “3 match” system that disappears when 3 of the same color are aligned, and the story progresses by clearing each puzzle stage.

In addition, the cats that appear in the game are rich in individuality such as kittens, boss cats, and naughty cats, and when you get to know each other through puzzles, they will find and bring you items, and the story of each cat that is different from the story of the game. You can enjoy it.

[3 minutes commentary]What is urban sports? Explain the meaning in an easy-to-understand manner! ｜ Sports for Social