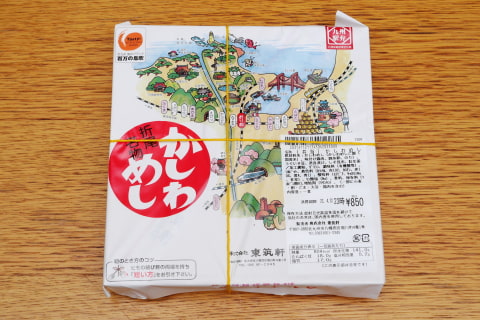 The “Higashi Chikuken Kashiwa-meshi” introduced this time is an ekiben originally sold at Orio Station in Kitakyushu City. I bought it at Hakata station this time. It is one of the most popular ekiben in Kyushu, so I wanted to try it for a long time, but I couldn’t buy it because it was sold out anytime, but this time before noon, Hakata station I finally got it by going to.

The old-fashioned folding box of warp wood is hung with hanging paper and tied with a string, which gives a strong sense of nostalgia and the atmosphere of an ekiben. In fact, this Tochikuken Kashiwa-meshi is a very historical ekiben that celebrated its 100th anniversary in 2021. And it still keeps the old-fashioned style. In recent years, the number of ekiben in this style has decreased, but I hope that they will continue to do so in the future.

When you remove the lid, you can see the kashiwa-meshi that fills most of the folding box. On top of the kashiwa-meshi, stewed chicken soboro, broth egg, and chopped seaweed are spread, giving a very colorful impression. Next to Kashiwa-meshi, sweet Uguisu beans, Narazuke, shiso kelp, and pickled ginger are served, but there are no other side dishes. I am strongly attracted to the cleanliness of playing with a single kashiwa-meshi.

Even now, 100 years after its release, the style of hanging paper on a folded box of warp wood and tying it with a string is still in place.

Kashiwa-meshi, which is covered with chicken soboro, broth egg, and chopped seaweed, is almost full in a box.

There are no side dishes, just the Japanese bush warbler beans, Narazuke, shiso kelp, and pickled ginger.It’s a clean composition that you can play with just one kashiwa-meshi

And, as for the taste of Kashiwa-meshi, the umami and slight sweetness of chicken is not a strong claim, but it is a very nostalgic taste. On the other hand, the chicken soboro served on the top is based on soy sauce and has a relatively strong sweetness and a strong seasoning. , The deliciousness is doubled and tripled. I strongly feel that it is delicious and has been popular for many years.

And when you eat it with chopped seaweed, the flavor of soy sauce is added and the taste changes greatly. Like the ramen of chicken and seafood double soup, you can enjoy different tastes by overlapping the flavors of both.

Kashiwa-meshi has a gentle taste with the umami of chicken and a slight sweetness.

Kinshitamako, which has less sweetness, enhances the umami of Kashiwa-meshi.

The flavor of the rocky shore of chopped seaweed greatly changes the taste of kashiwa-meshi, and you can enjoy a different taste.

As introduced earlier, Tochikuken Kashiwa-meshi is served with Japanese bush warbler beans, Narazuke, and shiso kelp as a chopstick rest, but there are no side dishes at all. However, even without side dishes, in addition to the deliciousness of kashiwa-meshi itself, I felt that it was truly enjoyable until the end with just the combination of chicken soboro, broth egg, and chopped seaweed.

Originally, I would like to get it at Orio Station, but I am happy that I can buy it at Hakata Station as well. It’s so popular that it often sells out relatively quickly, but if you see Tochikuken Kashiwa-meshi when you get an ekiben at Hakata Station, I definitely want you to pick it up.