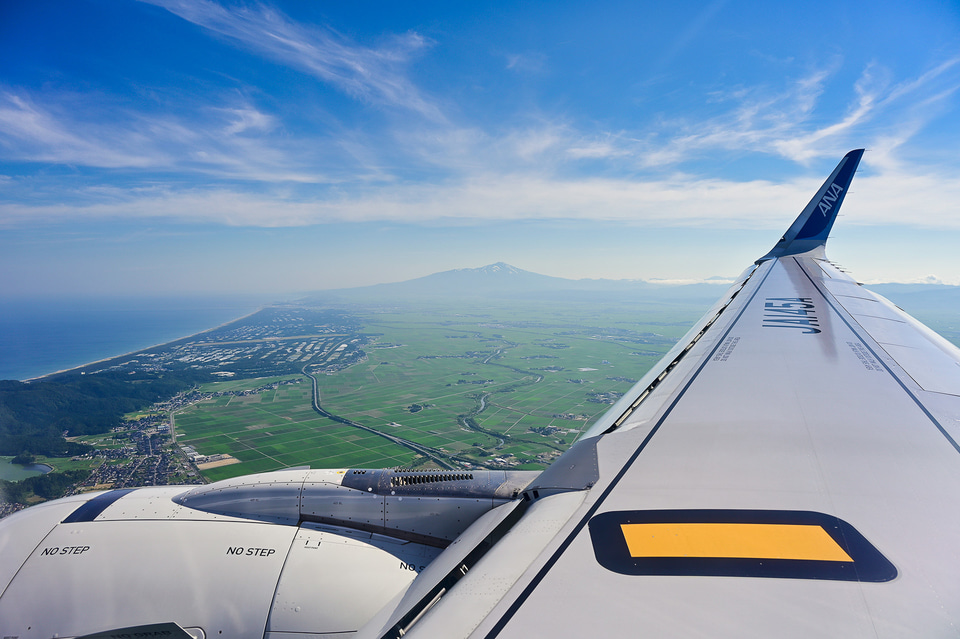 Flight time from Tokyo (Haneda) is about 40 minutes by ANA flight.A view of the majestic Mt. Chokai over the vast Shonai Plain

I participated in the “Air & Rail Solo Trip Media Tour” sponsored by the Shonai Airport Utilization Promotion Council. The purpose of this tour is to convey that the Shonai region in Yamagata Prefecture is a highly convenient place to fly from Tokyo and Haneda, and that it is a healing place for solo trips. Let’s deliver a pattern that literally became a healing journey.

After an hour by ANA flight from Haneda, I got off at “Oishii Shonai Airport”. The early morning flight departs at 7:05, but there are many advantages in that you can arrive in Shonai early and have ample time to plan your trip. ANA makes four round trips a day to Shonai Airport from Haneda, and because it is located between Sakata and Tsuruoka, it has good access to the city.

From the plane window, I could see Mt. Chokai on the border with Akita Prefecture, and the vast Shonai Plain in front of me. The Shonai region of Yamagata Prefecture is a treasure trove of nature blessed with ingredients from the sea, mountains, and villages. In addition to traditional foods such as shojin ryori, there are a large number of local indigenous crops (crops that have long been rooted in Shonai and are only grown in Shonai).

Between Haneda and Shonai Airport, ANA flights make four round trips a day.

Shonai Airport will celebrate its 30th anniversary in 2021. Coupons that can be used at the airport and various benefits are also available on the LINE official account “Oishii Shonai Airport Fan Club”

First of all, I was invited to Dewa Sanzan Shrine on Mt. Hagurosan five-storied pagoda, a national treasure, stands among the cedar trees at the entrance to the approach to Mt. Haguro, Ichinozaka. Said to be the oldest pagoda in the Tohoku region, it is said to have been built by Taira no Masakado, and the current pagoda was rebuilt about 600 years ago. In the morning light, I was so moved that my soul was suddenly shaken by its majestic appearance.

Zuishinmon is a red gate that stands at the entrance to the Hagurosan pilgrimage route.It is considered to be the gate that separates the human world from the sacred mountain.

“Mt. Haguro no Jiji Sugi” is the oldest and largest tree on Mt. Haguro, estimated to be over 1,000 years old.Designated as a national natural monument

Hagurosan five-storied pagoda, a national treasure, is located among the cedar trees at the entrance to the approach to Mt.It is said to be the oldest pagoda in the Tohoku region.

After eating Yamagata’s famous ball konnyaku at the Hagurosan rest house, we proceed to Dewa Sanzan Shrine, which stands at the center of the Hagurosan summit. When I forgot the daily hustle and bustle with the sunshine and the refreshing breeze, the Sanjin Gosaiden, which has a distinctive thick thatched roof, caught my eye.

Dewa Sanzan is a general term for Mt. Haguro, Mt. Gassan, and Mt. Yudono, and the largest shrine in Japan that enshrines these three gods is the Sanjin Gosaiden. . The thatched roof is said to be 2.1m, the thickest in Japan. Gassan Shrine is located in the center, and Yudonosan Shrine and Dewa Shrine line up on the left and right. The current shrine was rebuilt in 1818, and the Kagami Pond in front of it has been worshiped since ancient times as the “Mysterious Pond,” and is carefully protected by the people of Shonai together with the Sanjin Gosaiden. It’s been here.

The thatched roof is the thickest in Japan at 2.1m. Sanjin Gosaiden, the largest shrine in Japan that enshrines the three gods

Gassan Shrine is in the center, and Yudonosan Shrine, Dewa Shrine, and the three gods are lined up on the left and right.

The Kagami Pond in front of the Sanjingosaiden has been worshiped since ancient times as the “mysterious pond.”

Mr. Yoshizumi, an attendant of Dewa Sanzan Shrine, kindly asked me, “Why don’t you take a trip where you can feel the importance of living in this place that has been protected by the locals?”

A little before the summit of Mt. Haguro, there is the “Saikan” of the Mt. Haguro shrine. It was originally one of the three pioneers of Mt. Haguro, “Kazou-in”, and a worship facility for monks still exists inside. Currently, the general public can also stay here, not for training purposes, and you can also enjoy Buddhist cuisine. All ingredients are harvested from local mountains. Not only is it the ultimate in local production for local consumption, but it also has the meaning of purifying yourself from the inside by eating the crops grown in these mountains.

This time, we had the Shojin ryori “Suzufuzen” in the altar room, which was used as a place of prayer for Yamabushi training, and in the room of the imperial messenger who entertained court nobles from Kyoto. It is the ultimate detox food rich in local nutrients, such as sesame tofu and ankake, which is made with great care, and chrysanthemum seaweed rolls, and gassan bamboo shoots and dried persimmon tempura. There was more volume than I imagined.

“Saikan” is a prayer hall just before the summit of Mt. Haguro.General people can also stay here, not for training purposes, and you can also enjoy Buddhist cuisine.

It was originally one of the three pioneers of Mt. Haguro, “Kazōin”, and a worship facility for monks still exists inside.

The Shinzen-no-ma used as a place of prayer for Yamabushi training, and the imperial messenger’s room that entertained court nobles from Kyoto.

The chrysanthemum seaweed roll is impressive. Authentic Buddhist cuisine that purifies the body and mind.Highly recommended due to its volume

Next, I was taken to JA Tsuruoka’s Shonai Sand Dunes Melon Market. Shonai is a sand dune area facing the sea, and melon cultivation is thriving. Tsuruhime, Tsuruhime Red, and Andes melons from Shonai Sand Dunes were just in season. It is said to be popular as a gift. From the first day of my trip to Shonai, I have been able to enjoy many of the blessings of Shonai, and I am already revitalized.

The melons grown in the Shonai sand dunes are a masterpiece in both sweetness and taste.From left to right: Tsuruhime Red, Tsuruhime, Andes Melon

Shonai Sand Dunes melons are very popular as gifts.Shipped with a card specifying the date when it is ready to eat

He showed me a nearby melon field. Under the tunnel type vinyl ……

The net (mesh) that was stretched around was also growing splendid melons.

After being filled with delicious melons, we headed to the Tsuruoka City Kamo Aquarium, home to the Jellyfish Dream Museum, which boasts the largest number of jellyfish exhibits in the world. There is a jellyfish research institute inside the museum, where jellyfish and other fish that inhabit the Shonai sea are displayed. You can forget the time and look at it. Jellyfish Dream Theater is a super popular spot that looks great on social media.

Tsuruoka City Kamo Aquarium is located on a cape facing the Sea of ​​Japan. Local elementary school students also came and seemed to be having a lot of fun.You can see that it is a popular spot

Kamo Aquarium has the largest number of jellyfish exhibits in the world. In the exhibition room “Kuranetarium”, you can lose track of time just by watching the movement of the jellyfish.The lighting is also very beautiful.

This jellyfish is called compass jelly because it has a compass-like pattern on its cap.Commonly found along the Atlantic coasts of Europe

White jellyfish are said to have a strong tendency to attract light.Time passes quickly when you are absorbed in shooting with your smartphone or camera

It also has a jellyfish research institute and is actively engaged in jellyfish breeding activities.

Jellyfish Dream Theater is a super popular spot that looks great on social media. Can you imagine the sense of scale from the silhouettes of people? This alone is worth going!

We are also focusing on raising seals and sea lions. He made eye contact with a harbor seal.cute

Our accommodation for this day is the long-established “Tsukasaya Ryokan” in Yutagawa Onsen. Yutagawa Onsen is said to have been a hot spring resort for the Sakai family, the feudal lords of the Shonai domain, and as an entertainment district for those visiting the Dewa Sanzan Shrine for about 1,300 years. Among them, Tsukasaya Ryokan has been loved for many years as an informal hot spring inn founded in 1870, and the current owner is the 10th generation. While soaking in the free-flowing hot springs, I was healed by the homely smiles of the owner and the proprietress, and it was a relaxing time.

Meals are made with plenty of native vegetables, and you can enjoy local cuisine made with seasonal ingredients such as sashimi made from fresh seafood caught in the Sea of ​​Japan and branded meat called Yamabushi Pork. I also enjoyed Iwagaki oysters, which are in season in July. The sake tasting set (3 types, 6 types, 10 types) that allows you to fully enjoy the sake that the owner of Tsukasaya Ryokan is particular about is very popular. Yamagata Prefecture is one of the best sake-producing prefectures in Japan, and among them, there are 18 sake breweries in the Shonai region. Only Japanese sake with deep taste. Needless to say, I fell asleep comfortably after eating.

On the first day, we went to the long-established Tsukasaya Ryokan in Yutagawa Onsen. The gentle smiles and cheerful personalities of the 10th generation owner and proprietress warmed my heart.

I stayed in the enju room. It is said that Mitsumasa Homma, the 6th head of the Sakata Honma family’s inn, has been using it since 1870.The tokonoma and cupboards made of sophora are the same as they were at the time.

We recommend the sake comparison set, which the owner is particular about.Here you can taste 10 kinds of sake

Seasonal Iwagaki oysters that fishermen collect by skin diving.Depending on the weather, fishing may not be possible, so if you can eat it, you will be happy.

Deep-fried round eggplant with bean paste.It has a simple taste, but I felt that everyone at Tsukasaya Ryokan was filled with love, so I ate it warmly.

Yamabushi pork with salt pork and summer vegetables.The more I chew, the more delicious the Yamabushi pork becomes, and I remember it like it was yesterday.