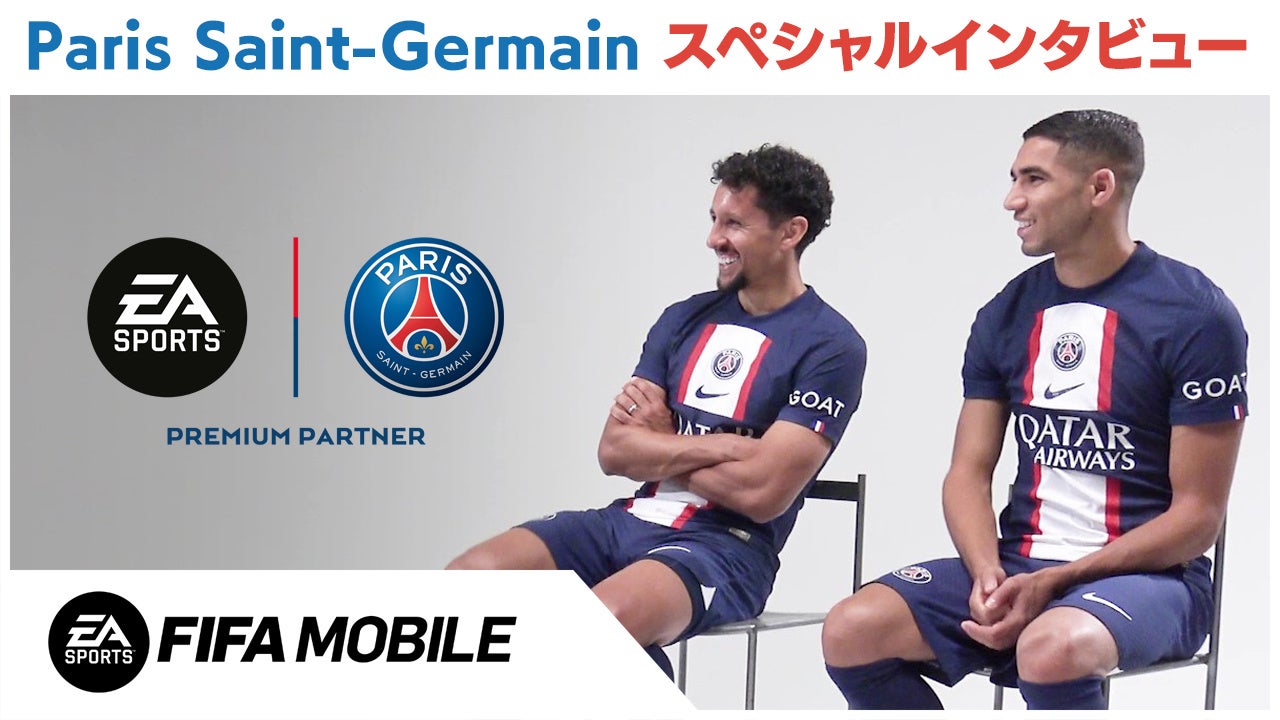 In the special movie, he came to Japan for his Japan tour the other day.Paris Saint-GermainFrom (Paris Saint-Germain) of the Brazilian representative who plays an active part as a main player of the teamMarquinhos playerrepresenting MoroccoAchraf Hakimiappeared. “FIFA MOBILE]As an interviewer, actress Yu Mashima, who is an official player, said, “FIFA MOBILEWe asked him about his abilities that he would like reflected in the game, and the players he would like to play with.
At the end of the interview, Mr. Majima, who is also active as a freestyle football ambassador, showed both players his proud lifting technique. Be sure to check out the video to see Majima’s performance, which surprised even the Paris Saint-Germain star players!

Also,”FIFA MOBILE]In the game, the five main players of the team have been picked up in line with the arrival of Paris Saint-Germain in Japan.PSG22 players” has appeared. The same player can be acquired at events and campaigns being held. 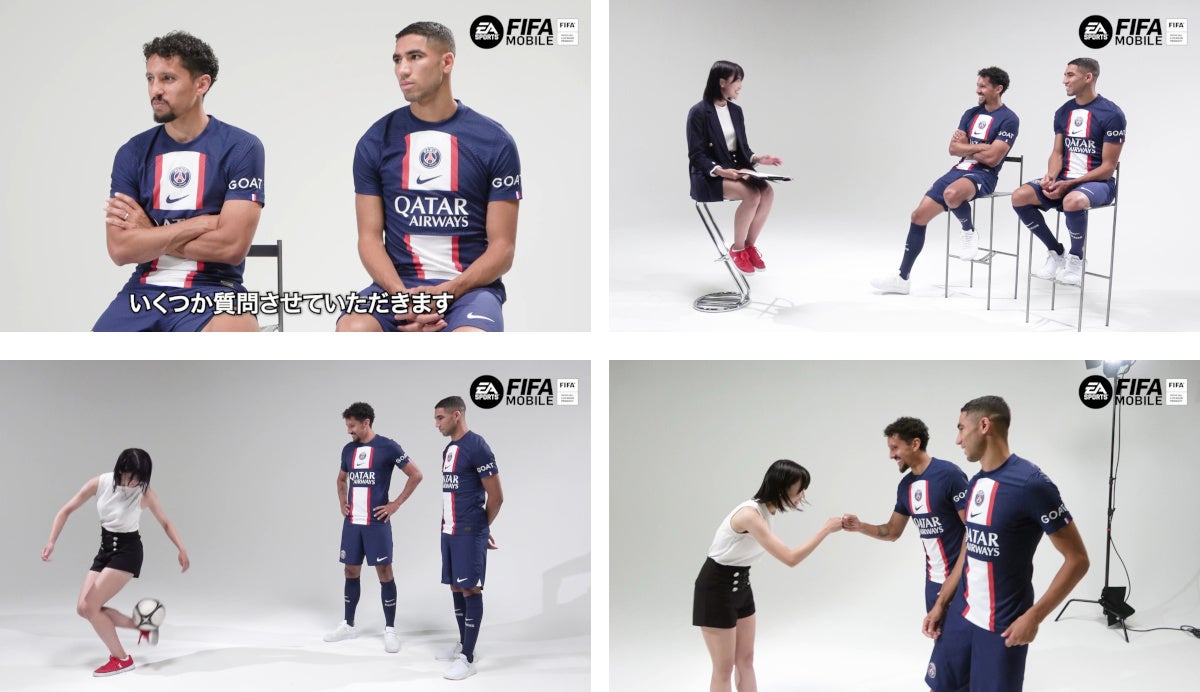 “FIFA MOBILE]In the game, a new class that picks up five main players of Paris Saint-Germain “PSG22 players” has appeared. “PSG22 Players” can be obtained from the login bonus for 4 consecutive weeks, which is being held from July 21st (Thursday), and the campaign for new and returning players. On this occasion “FIFA MOBILE]and get Paris Saint-Germain!

[Event / Campaign]
■ 4-Week login bonus
In the first of the 4 consecutive week login bonus that presents various rewards on a daily basis, on the first day of login,[PSG22]Kylian Mbappe playeralso on the seventh day[PSG22]Marquinhos playeror[PSG22]Achraf Hakimi(random one) will be given as a gift.
Don’t forget to log in every day to get PSG22 players!

■ NEW & COME BACK player support campaign
Newly”FIFA MOBILE]and returning players who have been playing for the first time in a long time, a NEW & COME BACK player support campaign is being held.
For all 10-day login bonuses for eligible users, on the first day“PSG 22 players” All 5 players will be presented as a setIn addition, we will also carry out a challenge mission where you can clear the specified mission and get player packs and strengthening materials.

“EA SPORTS™ FIFA MOBILE』(FIFA MOBILE) is an officially licensed FIFA mobile game. In addition to over 30 leagues, over 17,000 players and over 650 teams, including over 30 national teams, provide a full-fledged football world. Players will also be able to experience exclusive licensed content including world competitions such as the UEFA Champions League, Premier League, Bundesliga and LaLiga Satndaire.
“FIFA MOBILE]you can create your own original team using real clubs and players, and experience 11 vs 11 online battles, as well as “VS Attack” competing for the number of goals, and full-fledged league games with promotion and relegation. You can enjoy various contents according to your taste, such as “simulation league”, “manager mode” aiming for league promotion by making full use of tactics and instructions, and various skill games. You can also create your own team with the “locker room” function, which allows various customizations, including jersey numbers.
In the 2022 summer update, we implemented the “Authentic Challenge Mode” where you can select a real club team and start the game immediately. In addition, we have made various adjustments and improvements such as defensive player switching settings, and added team skill moves.
Experience the best football with the most advanced gameplay. 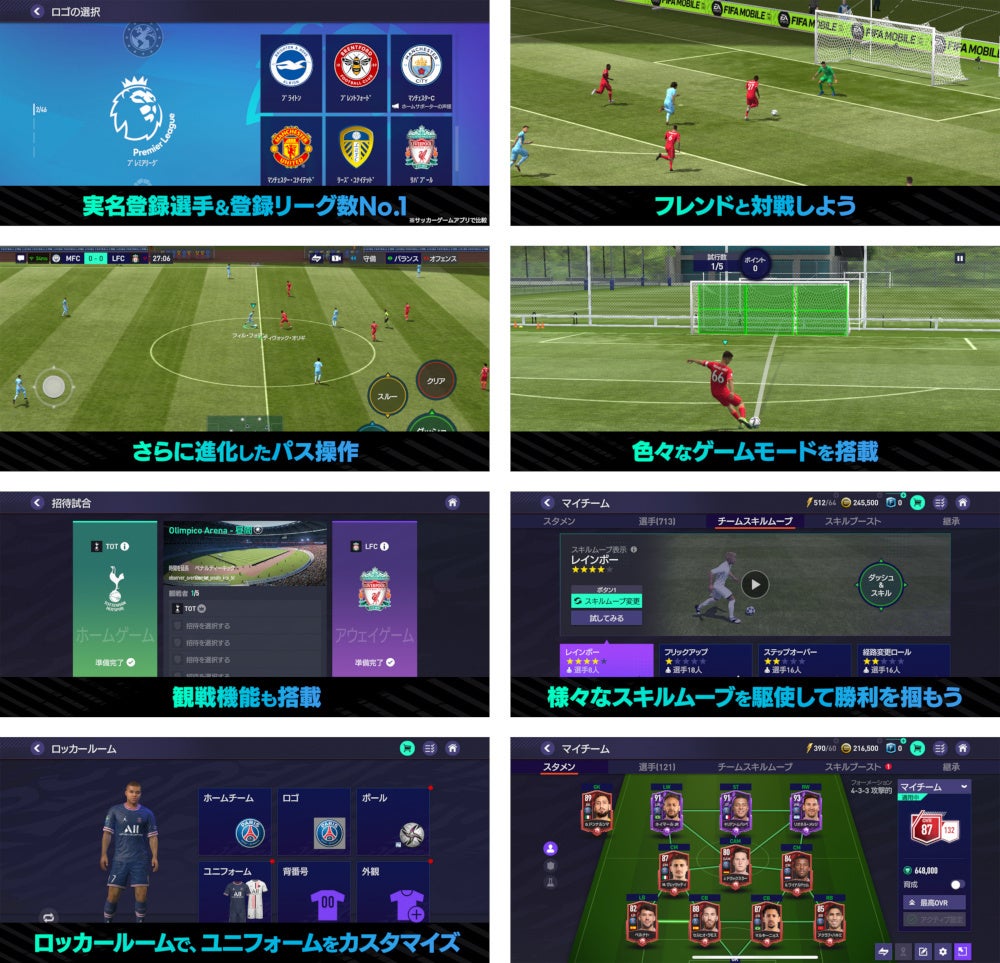 Founded in 1994, Nexon (headquartered in Minato-ku, Tokyo) is a company involved in the production, development and distribution of online games. Listed on the First Section of the Tokyo Stock Exchange in December 2011, it was selected as a component of the JPX Nikkei Index 400 in 2015 and the Nikkei Stock Index 300 in 2017. In 2020, it was also adopted by 225 stocks that make up the Nikkei Stock Average. Currently, more than 45 games, including the representative series “MapleStory”, “KartRider”, and “Dungeon&Fighter”, are available in more than 190 countries and regions for various platforms such as mobile terminals. doing. In 2021, Nexon acquired Embark Studios AB, which is based in Stockholm, Sweden and is developing multiple projects for global distribution.