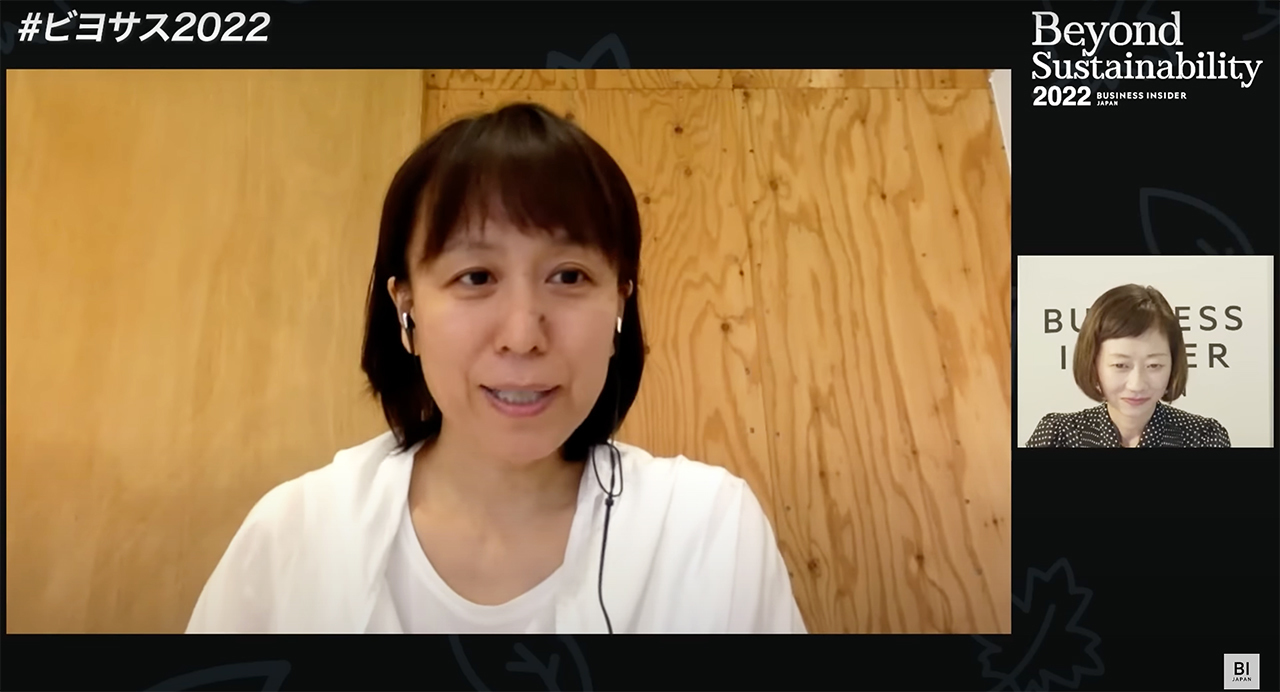 “Beyond Sustainability 2022” DE & I category winner Good Job! Center Kashiba. We asked Ms. Shizuka Morishita (left), the director of the center, about how to create an environment where everyone can make the most of their individuality, and about collaboration with companies.

What is the reason why efforts to “create new jobs in society” with people with disabilities are attracting attention?

——What kind of facility is Good Job! Center Kashiba?

Shizuka Morishita (hereafter referred to as Morishita): A facility that engages in activities to make art and design work with people with disabilities. It opened in Kashiba City, Nara Prefecture in 2016 and celebrated its 6th year this year.

——Good Job! I get excited when I look at the space of Center Kashiba.

Morishita: I wanted to make it a place where creative activities are born. Of course, it is important to give priority to safety and security, but I am working to create a place that is open to the community, where not only people with disabilities but also all kinds of people want to make things.

——It seems that you also paid attention to the construction of the building.

Morishita: We solicited designers with the concept of creating a place for various people to work and stay, and thankfully received 103 applications. Among them, we selected the Tokyo architectural firm “o+h” and created it through repeated discussions. 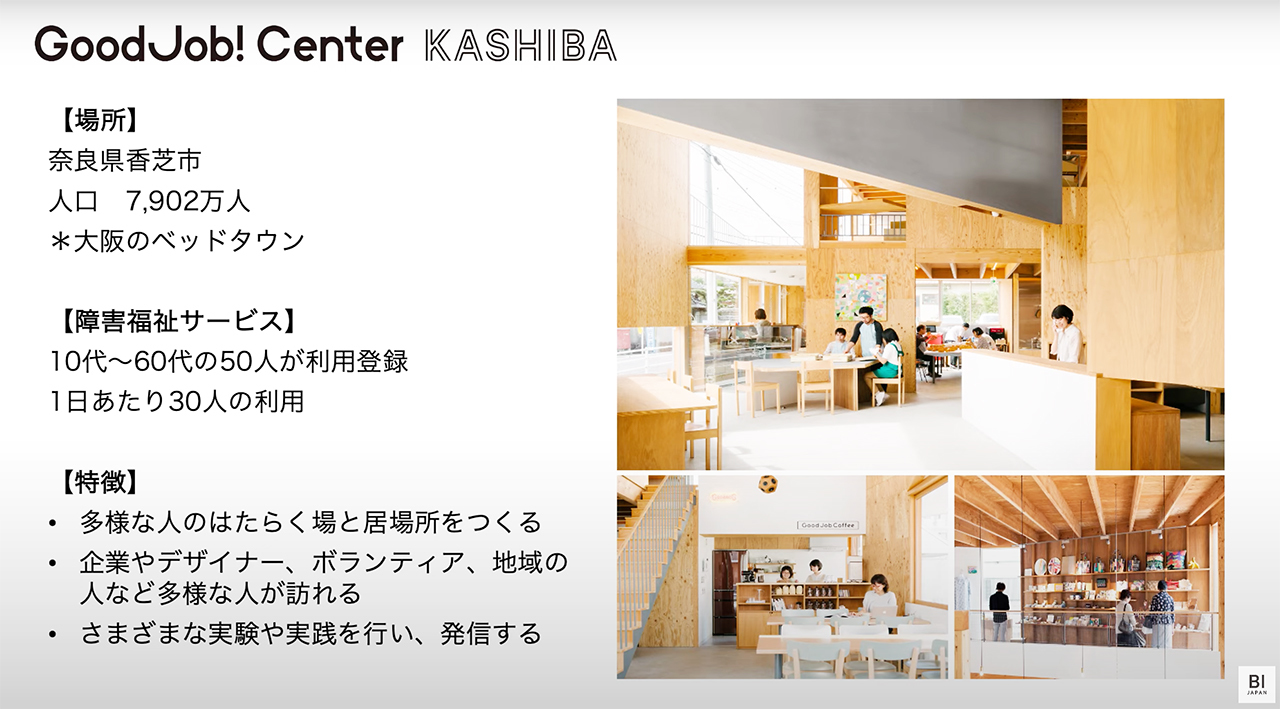 ——There are various spaces in the building, including shops.

Morishita: There are workshops for making original products, shops and stock rooms that handle various products other than original products, and cafes that can be used by local people. Based on the concept of consistently carrying out everything from manufacturing to dissemination, the building is such that they are connected to one another.

——How is it used specifically?

Morishita: Currently, about 50 people with various disabilities from their teens to their 60s are registered. About 30 people go there every day.

In addition, I think that many people are using it in a good way, such as staff and volunteers, local people and people who use it for business negotiations. 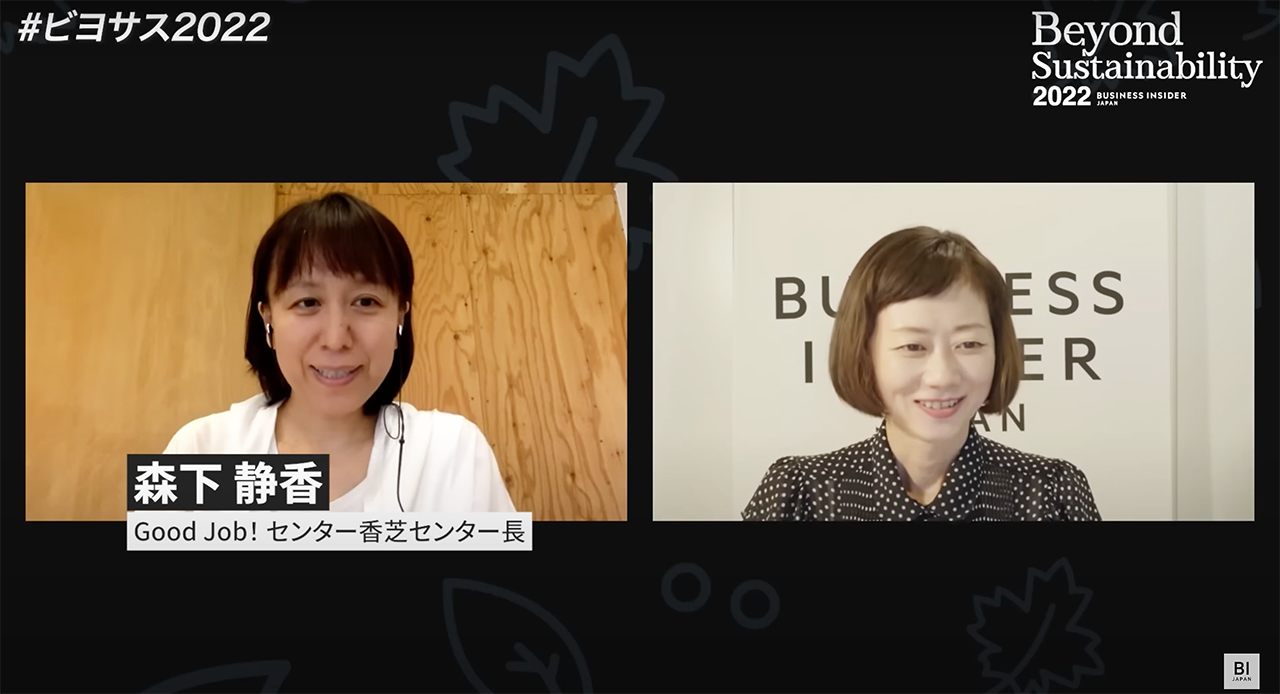 Morishita: Good Job! It was just before we started preparing for the opening of the center, when 3D printers and other digital machine tools were just beginning to spread in Japan. We also received advice from people outside the company, saying, “If you’re going to make things, why not try using them?”

——What kind of products did you make with the 3D printer?

Morishita: The first thing I made after consulting with you was the deer korokoro, a papier-mâché local toy with the motif of deer in Nara Park. It was a request from Nakagawa Masashichi Shoten in Nara, which is famous for Japanese goods.

——I heard that Shika Korokoro was born in 2015, before it opened.

Morishita:yes. Since there was no craftsman to make wooden patterns for papier-mâché, I used a 3D printer to make the patterns. In addition, in order to allow both people with disabilities and local residents to participate in the production, we have standardized work, such as making stamps with a laser cutter and painting them.

——What kind of response did you feel through the production?

Morishita: This time, we wanted to make our own original papier-mâché. I was planning to serve a special hot dog at the cafe at the center, so I made a papier-mâché local toy “Good Dog” with a dog motif. It was handed out as a souvenir to commemorate the opening.

——I heard that Good Dog started to sell after that.

Morishita: In 2018, it was adopted for MUJI’s “Fukukan” (an assortment of handmade local toys). After that, every year I began to make papier-mâchés associated with the Chinese zodiac. It is also used for Fukukan every year, and we also sell it ourselves. 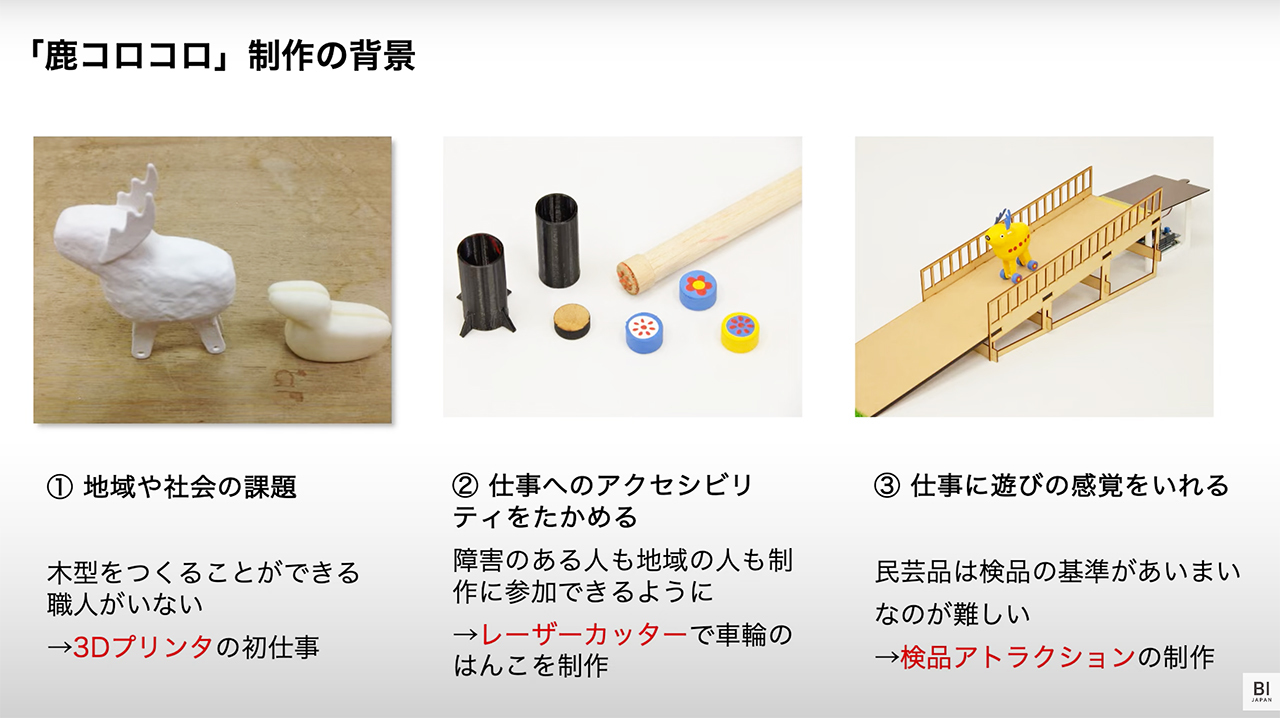 Copyright management for artists with disabilities

——The great thing about the Good Job! Center is that it does not close itself to the world of “welfare” and collaborates extensively with companies and governments.

Morishita: I am truly grateful, and there is an aspect that the relationship has created the work. MUJI’s lucky can was also realized because the designer saw Good Dog and talked to MUJI, and 2018 was the year of the dog.

Morishita: Toyota is one of the companies that has supported us for many years as part of a wide range of social contribution activities, but this is a completely different initiative from manufacturing.

——What are your specific initiatives?

Morishita: This is the work I do through an organization called “Able Art Company”. Able Art Company is like an agent that manages the use of digital works by artists with disabilities. There are about 120 registered artists, and about 13,000 works have been released. Toyota is using that work.

——You use a variety of works.

Morishita: Making it a wrapping car, exhibiting it at the Toyota Kaikan in Aichi and the Tokyo head office. It was also adopted as a LINE sticker calling for the prevention of the spread of the new coronavirus infection. 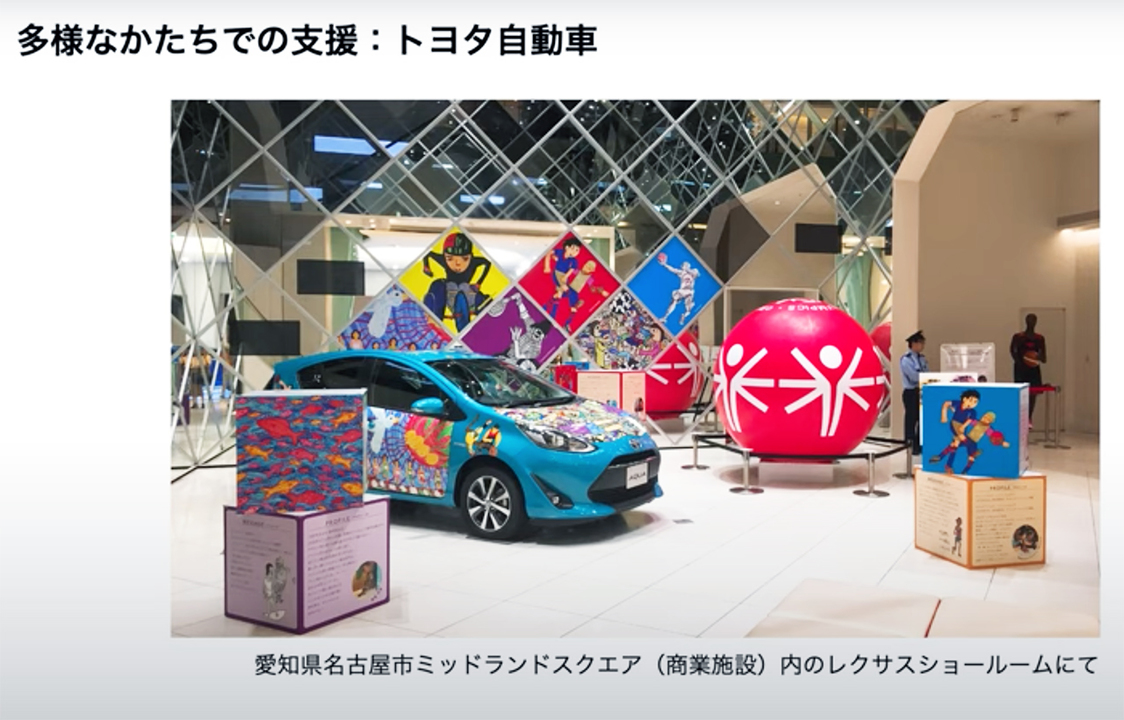 Established “Able Art Company” to manage copyrights and build an environment that facilitates access to the works of artists with disabilities. Various companies and organizations, including Toyota Motor Corporation, are making use of his works.

INTERVIEWER Your works are being released to the world through collaborations with various companies. What is the reaction of the artists?

Morishita: There are many people who are pleased with it. In Japan, unlike Europe and the United States, it is difficult to sell original paintings, so artists want their original paintings to sell, but on the other hand, they are displayed in places where people gather and are used for product packaging. I think there is also the joy of having your work used in familiar places.

——I heard that you are collaborating with Todaiji Temple.

Morishita: I have been indebted to Todaiji-san since the establishment of Tanpopo-no-Ie. Recently, we are cooperating with a project called “BIG Banner in Todaiji”, which was started for the repose of the souls of those affected by the Great East Japan Earthquake.

——What kind of project is it?

Morishita: “BIG Banner in Todaiji Temple” is a large flag “Ban” that is hoisted at the time of important Buddhist memorial services, and is hoisted in front of the Great Buddha Hall of Todaiji Temple. It is an effort to get

We also have a related project called “Private Museum”. With the cooperation of everyone in the shopping districts throughout Nara Prefecture, each of them will have their favorite paintings displayed in their shops for a certain period of time. This is an initiative that allows not only locals but also tourists to enjoy the paintings of people with disabilities while walking around the city.

Morishita: We have been doing this for over 10 years, and this project triggered an order for public art to be displayed in the lobby of a convention center in Nara Prefecture. In this way, a movement has emerged in which community art leads to work. 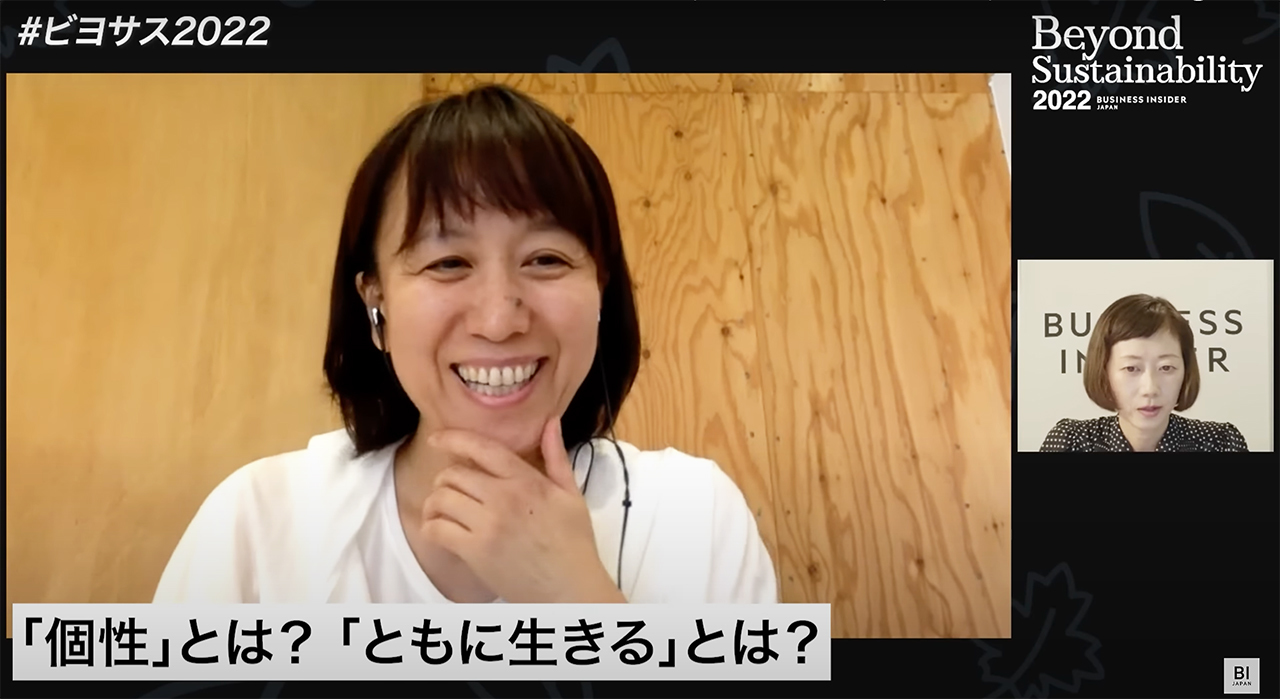 Mr. Morishita says, “The connections we have made have given birth to our work.” It is said that there was also a trend of job requests coming in as a result of community art being worked on in the area.

——In the sense that it creates jobs, it plays the role of a catalyst.

——Isn’t there something you’re struggling with?

Morishita: I don’t feel like I had a hard time. Of course, I’ve been working on projects like Shika Korokoro and projects like private art museums with a lot of ingenuity. I don’t know unless I ask the staff (laughs).

Being able to choose the breadth of life leads to “happiness”

INTERVIEWER I especially agree with the Good Job! What kind of thoughts do you have in mind?

Morishita: So you want society to become a place where people with disabilities can choose their jobs within the community? This is because I believe that the breadth of life that can be chosen will lead to the happiness of that person. I think it is important to have a job that is necessary in the area and a situation where you can choose.

—In Inclusive Design (Gakugei Shuppan), one of the authors, Mr. Morishita, points out the importance of being proactively involved in society as a participant, not just as a recipient of social security. I’m here.

Morishita: Thanks to the social security system, people with disabilities are now able to choose social welfare services. Because of the system, I can work face-to-face with various people, and I have time to find out what each person is good at.

On the other hand, I believe that social welfare is not just a system, but a collection of connections and mutual support that are necessary for living. Even if it is not in the current system, I think it is important to shape it if necessary. 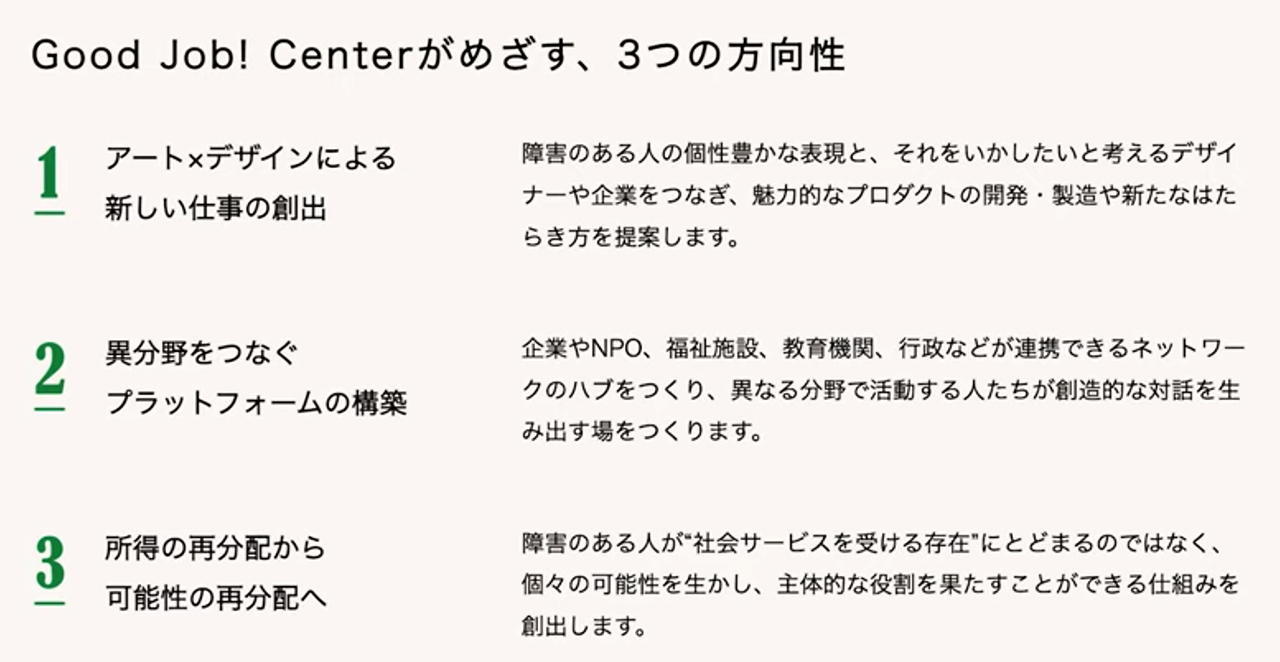 ——Inspired by the activities of the Good Job! Center, it is said that new challenges have begun all over the country.

Morishita: I think it would be really nice if there was such a ripple effect (laughs). However, in addition to building a network with welfare-related people, I would like to connect with experts in different fields such as art, design, traditional crafts, engineers, lawyers, and patent attorneys, and work together to improve society. So that trend may be spreading.

——Mr. Morishita, how do you see the six years since its establishment?

Morishita：Actually, when we first opened, there were very few things that we had decided on. Creating original products, having people with disabilities do distribution work, creating cafes and studios, and introducing digital tools. That’s about it.

Morishita: Conversely, because I didn’t decide too much, I was able to try various things with people with disabilities, staff members, and volunteers, and things I never thought would lead to work. .

Morishita:is that so. This is because the perception of “persons with disabilities” in society has changed significantly in the last 10 or 20 years. Especially since I started the Good Job! Center, I have come to think that “disability” is something between people who have various abilities but who are not good at certain situations. The word “disability” is also used with some hesitation.

However, in the end, it is important to work as a team, and at the Good Job! 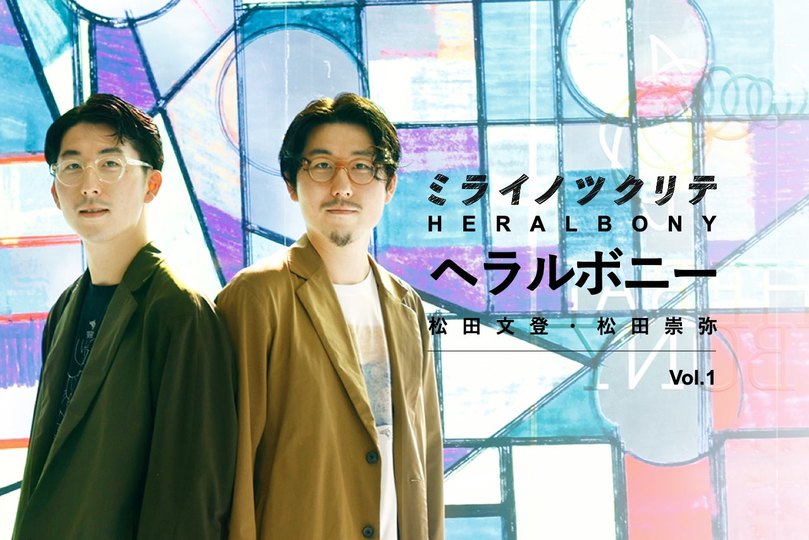 Opening on 8/10 (Wed.)! FIFA U-20 Women's World Cup Costa Rica 2022 Broadcast 12 games including Japan match and all final tournament games! All 32 games will be streamed live on J SPORTS On Demand!