Jeep updated the best sales in domestic history in 2021. This time, we will introduce the “Gladiator Rubicon” from Jeep! Serialization “NAVIGOE THE”… 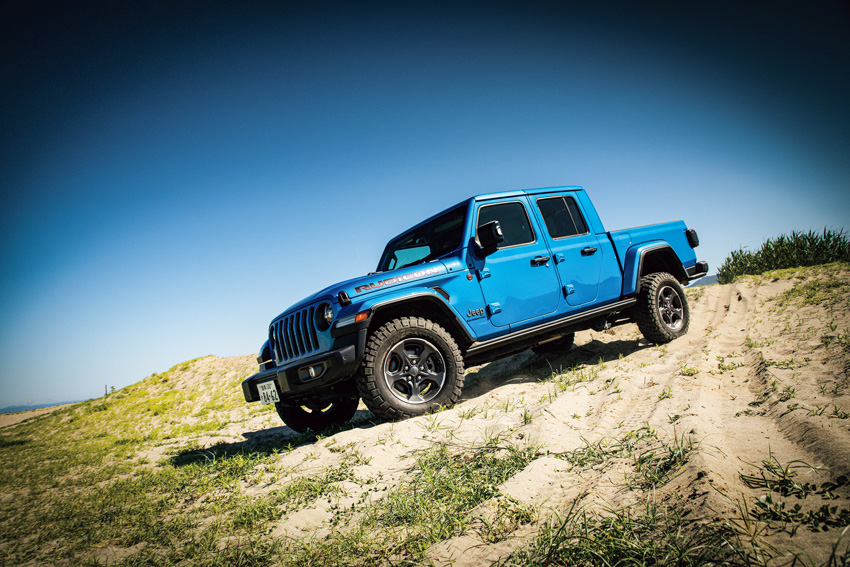 The brand’s first double-cab pickup truck, with its roots in 1940s Jeep trucks. It has the iconic Jeep seven-slot grille and two round lights, and boasts the longest body length in the current lineup. The grade introduced in the Japanese market is only the strongest specification “Rubicon” that excels in off-road performance. Because it is a truck body, it will be registered as number 1 in Japan.

The strongest play car that drives self-play and adventurous spirit

The jeep brand’s rapid progress is unstoppable. Annual sales in 2021 will record approximately 15,000 units, renewing the highest sales in domestic history. Among the seven brands of the Stellatis Group, which has Jeep, it is the top earner, accounting for about one-third of the sales volume. Among them, the synonymous Wrangler is overwhelmingly popular, and the number of registrations has reached a record high of about 7000 units. It is so popular that even five years after purchasing a new car, the residual value rate exceeds 60%. It boasts a threat resale even in the used car market.

A pickup truck based on such a popular Wrangler is the leading Jeep Gladiator this time. Received orders for 400 units in just three months from the initial introduction, selling out the expected number of units for the year. 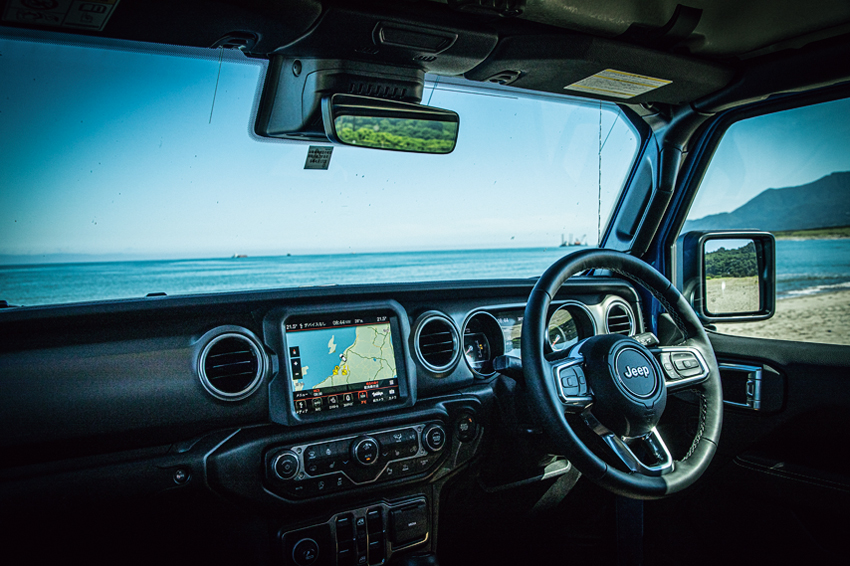 The dashboard design is horizontal, making it easy to see the slope of the road surface even when driving on rough roads.

The first thing that surprises those who see it for the first time is probably its size. As expected of a full-size pickup from North America, the overall length is 5600mm and the wheelbase is 3490mm, a size that is unthinkable for ordinary cars. When I actually got on it, I got the impression that it was more maneuverable than I thought. However, you can only see the rear fender with the rearview mirror alone, so you need to be careful when backing up.

The Gladiator is equipped with FOX performance dampers on the suspension to improve its handling over rough roads. This is equipment only for the Gladiator, which is not set on the Wrangler, but this damper works well regardless of whether it is on-road or off-road. 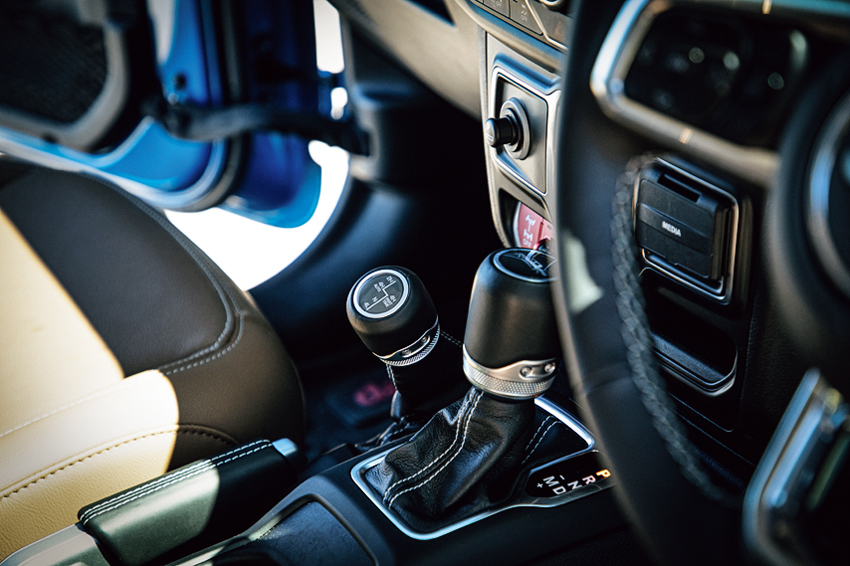 On the left side of the shift lever is a transfer lever that switches between 4WD driving modes. A four-wheel lock is also possible.

The first thing I noticed when I started running was that the feeling of tapping that I felt in the Wrangler had decreased. The Wrangler’s ride, which had the impression of directly conveying small bumps in the road surface, makes him feel somewhat soft. The impression does not change even if the stage is moved to the highway. He felt less of a shock when driving over a road joint. I realize that the ride comfort is better than the Wrangler. FOX dampers are not very well known in the four-wheel world, but they are famous for two-wheeled vehicles such as motorcycles and bicycles. It is particularly strong in off-road systems, and in recent years in the world of mountain bikes, it boasts an overwhelming share of the world, with almost all top riders using FOX front suspension. Even mountain bikes have a reputation for smoothness of movement, and the Gladiator had the same impression.

The benefits of the long wheelbase are especially felt in straight-line stability on highways, and are extremely comfortable over long distances. Combined with high-performance dampers, unnecessary shaking is reduced. However, the chassis structure of the ladder frame is the same as the Wrangler, so the jeep’s peculiar rolling comfort is still alive. This may be a place that can be divided into the Jeep-likeness. 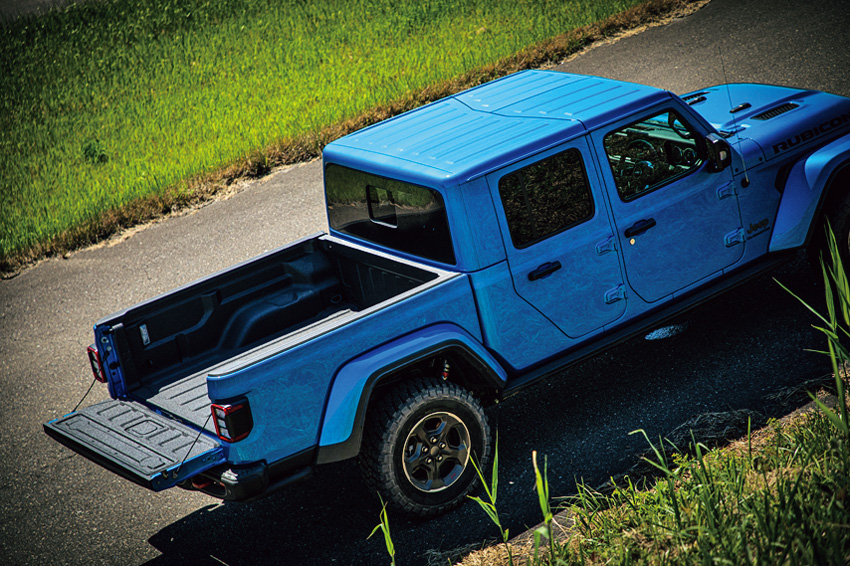 Get off the highway and soon arrive at the coast. The bright blue body color looks great on the sandy beach. The smooth movement of the suspension makes it very easy to handle, even on off-road roads with many bumps and ruts. Despite its large body, the car changes direction as you wish, making driving so much fun. Even when you are likely to get stuck, it is easy to understand because the information on the road surface is transmitted firmly. Even ups and downs, you can go forward without fear. By the way, the transfer was able to run almost without problems with “4WD auto”.

Although it is a rare existence as a full-size pickup, it is a gladiator that has the potential to be fully enjoyed in Japan. The price has continued to rise due to the soaring price, but considering that the American pickup is parallel imported, the current price of 9.2 million yen can be said to be a bargain price.

It is not a car that everyone can own, but it can be said that it is an attractive adventure gourmet that makes it easy to imagine how to enjoy it in a way that can only be experienced with this car.

Three keywords that unravel the Jeep

The rugged styling of the “Jeep”, which can be said to be the origin of the popular SUV. Here, we introduce the latest circumstances that the Jeep brand is working on. 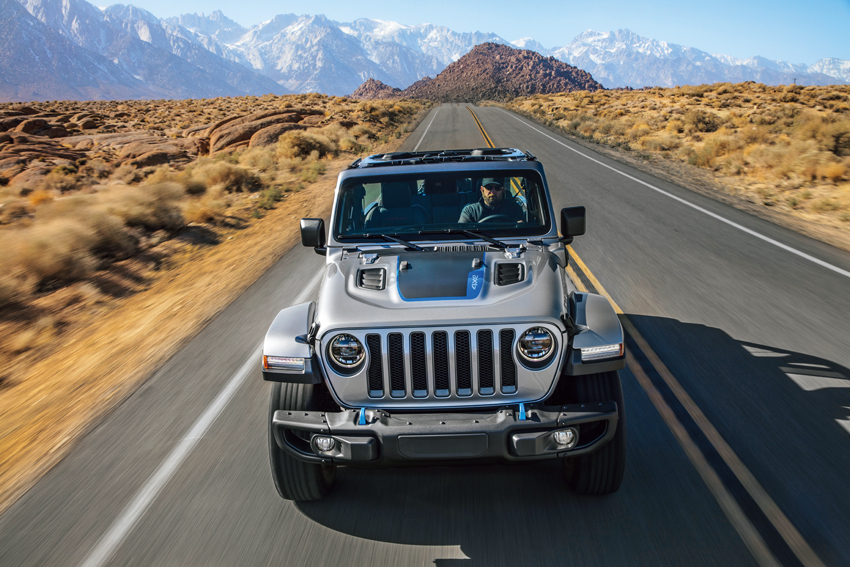 1. Wrangler’s roots are Willys MB, which ran around the world
“Willis” is often used as a Wrangler special edition model name. This name is taken from Willys MB, the root of Wrangler/Gladiator. Developed during World War II and used by the US military. Structures such as ladder frames and rigid axles have been inherited to this day, and the short-body Wrangler in particular has a strong resemblance to the Willys MB. 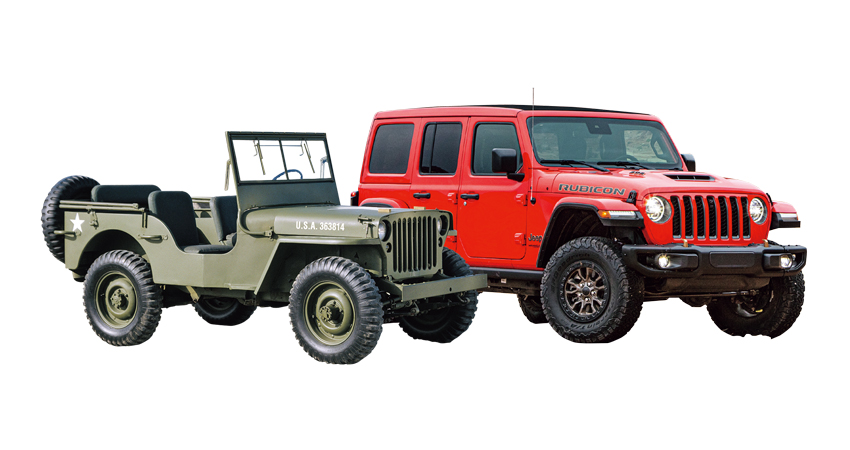 2. Finally, a Wrangler with an eye on electrification is also available!
The formula of gasoline engine + four-wheel drive is the tradition of Jeep. However, in recent years, the 4×4 technology has been electrified, and it is beginning to move toward the realization of traditional running performance even with electric power. Starting with Renegade 4xe, a plug-in hybrid vehicle that has already been introduced in Japan, 4xe is also available for Wrangler and Grand Cherokee in the North American market. The Wrangler 4xe is the best-selling PHEV in the first half of 2022. 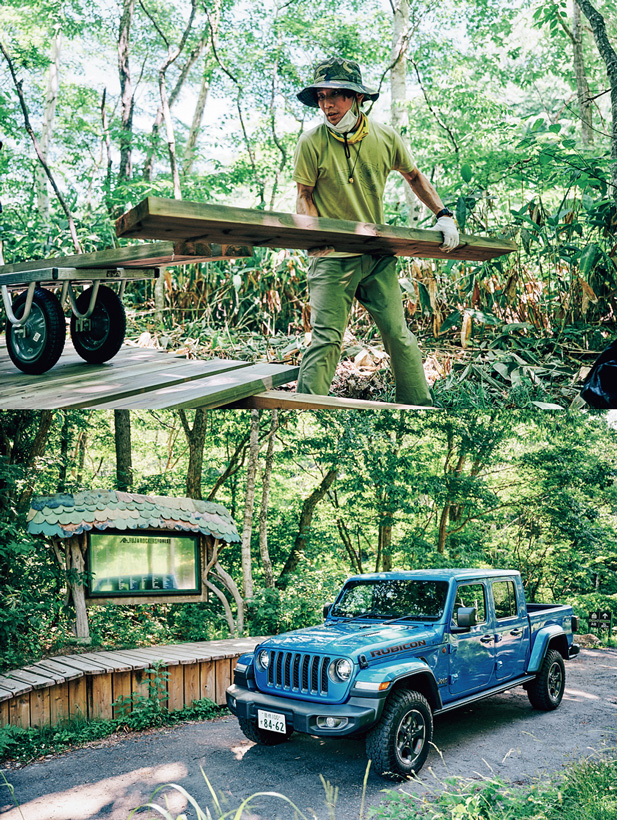 3.Boardwalk Volunteers Sponsoring Fuji Rock
The summer outdoor festival event “FUJI ROCK FESTIVAL” (hereinafter referred to as “Fuji Rock”) was a great success in 2022 as well. Since 2011, Jeep has been participating as an official partner in the CSV activity “Fuji Rock Forest Project” in the area around Naeba Ski Resort, which was started by local companies and municipalities. We continue to support volunteer activities to maintain natural wood sidewalks called boardwalks in the forest.

What is the series “NAVIGOETHE”?
A car that stimulates the soul and is fun to look at, drive, and operate. From a status symbol that tickles the desire to own a car, to a genuine sports car that allows you to interact with a car, to a car with a heritage, NAVIGOETHE series introduces exciting cars that fulfill the selfishness of adults!

Would you like to have a snack at 3 o’clock? Easy one-handed sweets[summary of snacks]- Lifestyle | SPUR