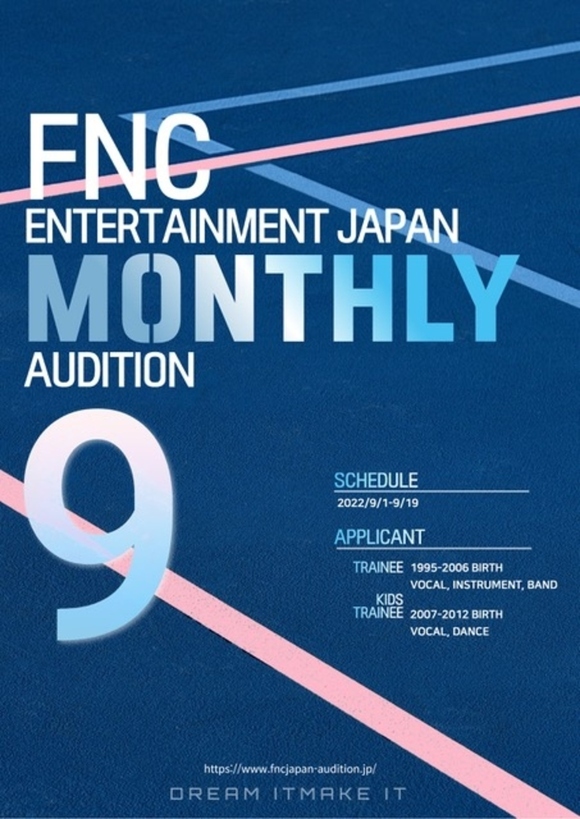 As pioneers of the Korean rock band world, FNC continues to produce top artists such as AOA, N.Flying, SF9, Cherry Bullet, and P1 Harmony, with FTISLAND and CNBLUE leading the way in Japan and other countries around the world. ENTERTAINMENT has decided to hold an audition unique to Japan at FNC JAPAN. We started accepting applications from today (1st).

Speaking of FNC JAPAN, it belongs to the five-member girl group PRIKIL (debuted on May 4, 2022), which was born from the survival program “Who is Princess?” All members of PRIKIL became trainees after auditioning for FNC JAPAN, and finally got their dream of debut. In addition, it has been decided to hold a joint Japan-Korea idol band formation project “THE IDOL BAND: BOY’s BATTLE” that will be broadcast simultaneously on TBS, SBS MTV, and SBS FiL. From the prestigious idol band FNC ENTERTAINMENT, they aim to debut simultaneously in Japan and Korea as “the best band that grabs the hearts of global fans”.

In this audition to search for a new rough stone following PRIKIL, it will be divided into “TRAINEE” and “KIDS TRAINEE”. “TRAINEE” has established vocal, musical instrument, and band divisions for those born between 1995 and 2006. “KIDS TRAINEE” established a vocal department and a dance department for those born between 2007 and 2012. The purpose is to discover male and female artists who are active worldwide following top artists such as FTISLAND and CNBLUE who are active in the world. Successful applicants belong to FNC JAPAN as trainees, undergo training using the top-class training system in Korea at their own facility, and go on to the stages of Japan and the world. Aim for a spectacular debut.

Participants can apply from a special form during the application period from September 1, 2022 (Thursday) to September 19, 2022 (Monday / holiday), and for those who pass the document screening, practical skills and interviews Selection is conducted.