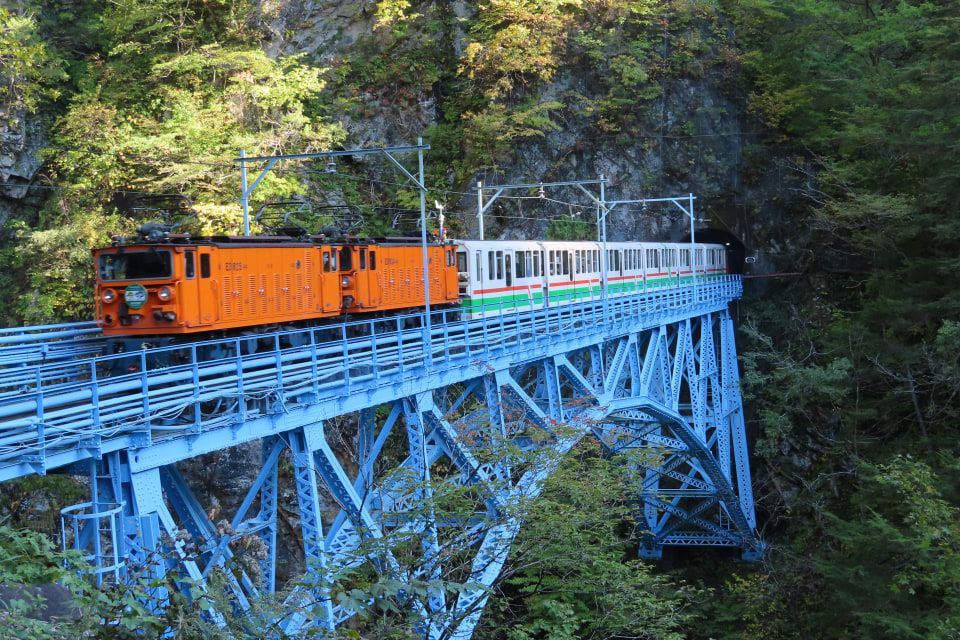 The Kurobe Gorge Railway is approaching the best time to see autumn leaves. The contrast between the emerald green river flow and the red and yellow trees is beautiful, and you can feel the wind while riding the trolley train that runs through the river. It’s the world of

Although it is one of the most unexplored areas in Japan, mobile phone companies have created areas around each station so that you can share the excitement of the colorful scenery with your smartphone, but it seems that shielded spaces like tunnels are not so easy.

Tunnel where the exit is not visible (taken with special permission)

According to Satoru Tanimoto, chief manager of the sales planning and public relations group of the Kurobe Gorge Railway Sales Department, the railway was originally laid to build hydroelectric power facilities, and was later opened for tourism. The width of the track is narrow gauge, and the diameter of the tunnel is small enough for a train to pass through.

Generally speaking, in order to be able to communicate within a tunnel, it is necessary to send radio waves from the end of the tunnel into the tunnel, or install communication equipment inside the tunnel.

According to Mr. Kazuya Funamoto, Execution Management 4G Group Leader, Process Control Center, Mobile Process Division, Construction Business Headquarters, KDDI Engineering, the inside of the tunnel is winding, so even if antennas are installed at both ends, there are places where radio waves cannot reach. put away. Even if radio waves reach the inside of the tunnel when there is no train, as the train runs and fills up the space in the narrow tunnel, the radio waves are blocked by the car body, and there are situations where the radio waves do not actually reach the smartphones of the passengers. It’s easy.

au (KDDI) took these issues seriously and took three years to achieve a state where communication is possible in all sections, including tunnels.

The white cylindrical thing is the antenna.Base station equipment is painted brown

Antenna is also installed in the winding tunnel

According to Naoki Shimada, Indoor Design Group, Indoor Center, Mobile Process Division, Construction Business Headquarters, KDDI Engineering, antennas are installed at both ends of the tunnel, and in addition to blowing radio waves toward the center, coaxial cables are also run inside the tunnel. By installing an antenna and doing various other things, we were finally able to cover the entire area.

Since the entire area is designated as Chubu Sangaku National Park, it was necessary to take into consideration the landscape, such as painting the antennas brown, which would reduce performance if painted.

Mr. Shota Kanetsuki, Group Leader of Area Planning Group, Quality Control Department, Engineering Promotion Headquarters, Engineering Headquarters, KDDI, said, “We installed new antennas in 50 locations and connected all 41 tunnels. In winter, there is a lot of snow. We had to install it in a place where the equipment wouldn’t break.”

Since the railway runs through a deep valley, there are no side roads, so the equipment was transported within the normal timetable of the trolley train, and the installation work proceeded at night when there was no service.

au smartphones can communicate even in tunnels

By the way, the route connecting the end of Keyakidaira to Kurobe Dam is only used by Kansai Electric Power to manage and operate hydroelectric power generation facilities, and is not currently used for tourism purposes. It will be open to the public as a route.

While transferring heavy equipment such as construction trolleys, inclines, and shaft elevators, you can see various power facilities built underground, such as high-temperature tunnels, and it is expected to be a hot new sightseeing route that can be connected to the popular Tateyama Kurobe Alpine Route at Kurobe Dam. be done.

Regarding the possibility of making the canyon route an area, he said, “There are no plans at the moment, but we have heard that it will be open to the public, and we will consider it while listening to the voices of customers. It is expected to rise,” said Kanetsuki.

In everyday life, it is natural for smartphones to be connected, but it seems that there are more difficulties than you can imagine to make a tourist spot in the great outdoors an area. Let’s share a picture of the superb view while thinking about the hardships of such engineers.

From October 11th to November 30th, the “Autumn Pack” is sold for 3,000 yen. . Furthermore, if you meet the conditions, you will also receive a “Toyama Souvenir Coupon” that can be used at member stores in Toyama Prefecture.

Change your swing!How to make a cool address that stretches your spine | “If you enjoy your work, you will enjoy your life” | GOETHE Men's Lifestyle Magazine

Started offering “Algo-style for business”, an educational platform for corporations that supports the continuous technical evaluation and growth of engineers - Japan NEWS